The Politics of Eco

One of the most important and controversial subjects in snowboarding (and life in general right now) is that of climate change. Everyone has an opinion and the topic is far more complicated than any one person can imagine. From board manufacturers to blog manufacturers everyone sees things from a different angle and agreement is scarce as Sasquatch these days.

The reaction to the 'green' products popping up in the snowboard industry is similarly varied. Reports from SIA indicate an increase in such products this year. This led to one of the more memorable revelations to me this year. O-matic is coming out with a board called the Extr-Eco next year. The topsheet graphic takes a bunch of shots at the eco ethos. Todd Richards broke it all down in Shayboarder's comments and it turns out he tried to get a price on eco-friendly materials from his supplier only to find out that some other companies have exclusives on those materials, so only they can use them for the next two years. I've got to agree with Todd here, that's a bunch of bullshit. If it's intellectual property, that's one thing, but recycled materials... help me out here. Isn't that supposed to be for the greater good? 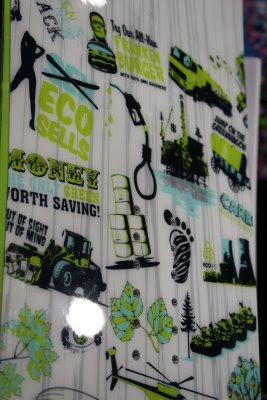 O-matic's Extr-Eco Shayboarder photo
I know that when Holden came out with the hemp fabric that they use in their outerwear they took out a three-year exclusive on that, but that seems more like an innovation to me. That and they were just starting out and that was a big selling point for them. It could have been their ass had they not done that.

Later in the same comment thread, Brad from Salomon chimes in with a contradiction, saying that eco-product sales are "horrible." Going on he says, "Anyone who thinks that eco sells product or makes money is horribly misinformed." Wow. I don't have nor know where to find sales info like this, so I'm going to have to defer to those wiser than myself. It makes sense though: spend more money on an eco-friendly product (and there's no debate that they cost more) and you better make up for it in sales or you're in the red. This is where I think companies need to be replacing their conventional lines with eco-friendly instead of adding to them. It's just counterintuitive the other way and ends up doing more harm than good.

The flaw with this line of thinking is that the price of conventional products doesn't match the full cost. Economic cost, yes, but not ecological. It's a short-sighted figure, not taking the depletion of resources into account. This exceeds the scope of my blog, but really goes to show just how deep and multi-faceted this debate is.

My take on the whole thing is that eco is no trend. Tight pants and neon colors are trends. Eco is a whole new way of doing things. Revolution might not be the right word, but it's the only word that comes to mind. Fashion trends (and maybe even rocker) will come and go ad infinitum as tastes change. The green movement has nothing to do with fashion (except for, you know, green fashion) and everything to do with function, in this case trying to live more harmoniously with the Earth. We want it to be around as long as possible. And yeah, I know, there's a growing subset that is getting into green because it's cool. Hopefully it leads to life-long changes and not more green-washed consumers. 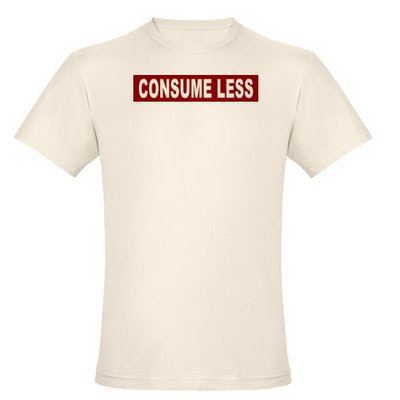 I just had to get one in every color!
This is similar to the way greenwashing can lead companies to be more sustainable, though. Check out this article to see what I'm saying. Here's a good summary paragraph from it:

Counterintuitively, greenwash -- real or perceived -- can actually be good for a corporation if that business genuinely wants to become green. As soon as a company starts hyping its environmental responsibility, legitimately or not, it invites greater scrutiny from the public. As a result, social pressure to do the right thing increases. More important, employees become more aware too. If a company isn't living up to the standard it sets publicly, they'll complain, and they'll work to change their company, because nobody likes to work for a cheat.

Yes, this means we're going to have to make some phone calls and write some letters (or at least e-mails and blog comments). It's the least we can do.

This brings me to some easy things we can all do to shred more lightly on this Earth. Consume less and/or make what you have last longer. Something as simple as spray-on waterproofer can help your outerwear last another year and it's a lot cheaper than buying a new kit every year. [Side note: I know that spray-on waterproofer isn't the most innocuous thing, but it beats producing a whole new jacket, for example. While I'm at it, I also know that bamboo production isn't harmless either, but it's better than fiberglass. We're trying for 'better' here, nothing is perfect.] Carpool or take shuttles to the mountain (you know, when you're not hiking). Remember that shuttle from Portland to Mt. Hood Meadows that runs on waste vegetable oil? 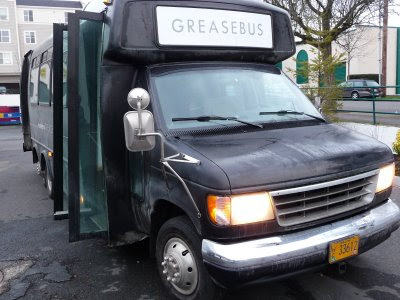 The Greasebus, baby, open for service!
Check out non-profit organizations like Protect Our Winters. They have a wealth of good information and put your membership and donation dollars to good use. Another good group is the Ski Area Citizens' Coalition. They compile a report card of resorts (only in the western US, unfortunately) that rates their "environmental performance." They also give details so that you can tell who's greenwashing and who's setting a good standard. Not everyone can make his or her own snowboard, but there are things we can all do to lessen our impact. Plenty of people and groups are already out there laying the groundwork in this movement, so to call it all BS would be a stunning disservice to guys like big mountain Jeremy Jones, Nicolas Müller, Wolle Nyvelt, Mike Basich and Mike Parziale and organizations like Grease Not Gas, Ski Area Citizens and POW among countless others.

No matter what your stance is on global climate change, it's clear that there are things we can do to turn the tide, but it will require group effort. And what is a group but a collection of individuals. Just like someone has to be the first to show up at a rally and the first to sign a petition, it's all about getting the ball rolling. Don't think of yourself as just one, think of yourself as one more.