Absinthe's Flipside Out Now on iTunes

All the dudes over at Absinthe Films have been doing a TV show about the making of their films for the last three years. The most recent season, which covers the making of Ready is out now on iTunes for 9 bucks. That's for six, 20-minute episodes. Drop another $6 and you can get Ready, too. Make it an Absinthe marathon and watch everything in one night while polishing off a bottle of their namesake beverage. Now there's an idea... Problem is, I'm already two episodes in and the liquor stores are closed. 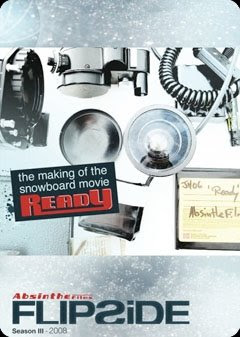 I'll catch you on the flipside whenever you're ready...
The show is really good insight into what those guys go through to make a snowboard film. All kinds of craziness in different countries, resorts, backcountry, down days, urban spots, you think it up they've lived it. Last year, Wolle got buried in an avalanche and Brusti gashed his arm punching through a window. How could they possibly compete this year? For less than a Hamilton, you can find out. Bump it up to a Jackson and you can find out, watch the finished product and have enough left over to deliver some economic stimulus to the 7-11 for some snacks...
Written by BoredYak at 10:49 PM