Another day at Baker's Legendary Banked Slalom and I chose to inspect another new board. This one is Never Summer's 2010 Premier F1-R. My initial impression of the board was that it was heavier than average hanging from my foot on the chairlift. That's easy enough to make up for, depending on how it rides... Also, the nose and tail shapes were different, supposedly to enhance float in powder. Too bad I wouldn't get a chance to test that today. 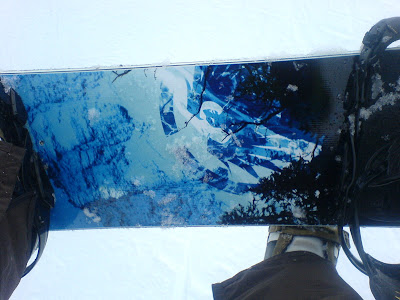 Dangling from my boot

The ride on this beast was stiff and damp. And beast is an apt title. Everything I'd heard about Never Summer boards charging was true on this ride. That was the most noticeable characteristic of this board. Hardpack, chunder, tree bark, no match for the Premier F1-R. That said, this is not a board for pressing and jibbing. Maybe if a tree jib is in your way the F1-R might attack it for sport.

What else? Well, I'm amazed at the differences in companies' reverse camber applications. Never Summer runs what they call R.C. Technology: rocker and camber. Basically, it has a camber point under each insert and rocker between the inserts. On the snow, this translates to less catchy turns with plenty of power out of turns. I would rate the pop as moderate. Nothing surprising either way.

Accompanying R.C. Tech is NS's Vario Power Grip sidecut. Instead of having one radius throughout the sidecut, NS uses three. A deeper one toward the tip and tail, a shallower one near the inserts and a straight line at the waist of the board. This creates six contact points during turns instead of the standard two. This really translates to stable turns, even on the Baker boilerplate.

This board excels at hauling ass in any condition. It can handle anything you can up to a 60° ice skating rink through trees (OK, that might be a little extreeme). It is a freeride ruler, though not a board I'd want to ride everyday, due to it's stiffness. Those racers in the LBS could shave some seconds ripping with a stick like this one. Though it won't be out 'til next year, here's Never Summer's site to check the dirty when it goes live next fall.
Written by BoredYak at 12:31 PM