Ah, Las Vegas, it's been so long since last we danced. This trip seemed strange because now I have friends who live there, so I stayed with them and not on the strip in some gaudy hotel. In fact, I managed an entire trip without setting foot on the strip. This isn't to say I didn't gamble, it also isn't to say that I avoided over-sized hotels altogether. This trip's extra-curriculars went down oh so close to the strip at the new (or maybe not that new anymore, but I have a soft spot for Binion's) home of the World Series of Poker, the Rio. A brief recap for those of you stuck in the days of the bad guy in the black hat: poker is super-hot right now. Billions of dollars change hands, legally, every year at real and on-line poker tables. The WSOP is the largest, most prestigious series of tournaments in the poker world. The winner of each even is awarded a gold bracelet (and a pile of cash), so if you ever hear of a 'bracelet-winner' you can be sure of that person's skills at the ovular table. The only bracelets I own are the ones that tie back my hair, but I've got some friends (poker pros and would-be pros) who try their skills against the best. I've been known to put a couple hundred on the line, but these tournaments run upwards of a thousand bucks a pop. One tournament even costs $50,000 to enter and they play five different poker games to determine a champion. That's not exactly chump change, unless you don't belong. Then you're just a chump for thinking you can hang. 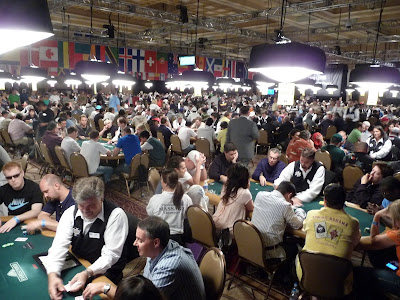 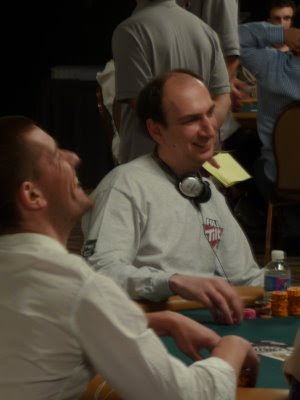 Mulit-millionaire pro Gus Hansen (left) and multi-bracelet winner Eric Seidel (right)
The kinds of guys you play against in $50,000 H.O.R.S.E.
I just happened to be rolling through at that time of year. As you might imagine, the cash games were going strong. (as opposed to tournament play, where you're out when your tournament chips are gone, cash game play lasts as long as your own money lasts or until you choose to leave) My reward for parts skill, luck and patience was a couple hundred more than I arrived with. That should go a long way towards paying for this road trip with some fireworks thrown in there for good measure. Thanks for the venue, Vegas. Now if only it wasn't just as hot and sunny there as it was in Death Valley. Seriously, it was 107° three days straight. Hot enough to break a sweat walking from parking to the casino entrance. Problem, the AC was so high in the poker room that it felt like walking into a freezer. Maybe I should have dressed in layers. This is the only region I've traveled to where buying one of those gigantic gulps from 7-11 is actually an idea worth entertaining.

Enough of the past. I'm writing from Glenwood Springs, Colorado and tomorrow I'm headed east. One of the guys I met up at Baldface was Mike Gagliardi, a sales rep for Never Summer Snowboards. Tomorrow he's taking me on a tour of their factory in Denver. That should be a great opportunity for me to se what goes on in there and hopefully ask some questions about the whole process. Check back for that one and live vicariously through my wanderings yet again...
Written by BoredYak at 12:22 AM