In amongst Rocky Mountain National Park and astride the Continental Divide is a section of the Rockies called the Never Summer Mountains. To find the action sports company that bears their name, one travels east to Denver and looks amongst factories and astride a northerly section of Colorado Blvd. 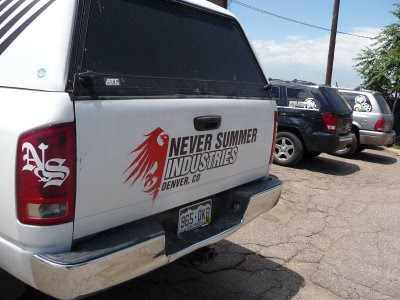 Don't worry, I found it

I made my way from much farther west on my current road trip. Mountain driving inevitably leads me to thinking about snowboarding, so anything snowboard-related was a welcome reprieve from the 90-100° temperatures outside. Just thinking about that now makes me sweat a little bit... 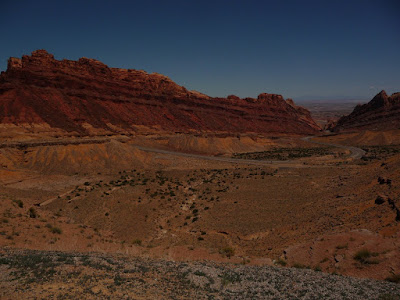 The San Rafael Reef
Don't think I forgot about you, Utahrds (Utahns? Seriously!?)

Luckily, Never Summer HQ was cooler than the outdoors. When I showed up, snowboard sales manager Mike "Gags" Gagliardi showed me around the offices and introduced me to the folks who make the process work. (I mistakenly referred to him as a rep in the last post, but he's taken on some more responsibilities than I was aware) Tim, Tracey, Jeremy, Micah, and Melissa were some of the Never Summer magicians who took a small amount of time out of their busy work days to show a humble blogger what's up. 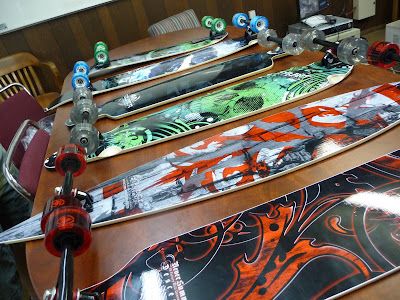 In one room: the new longboard line... 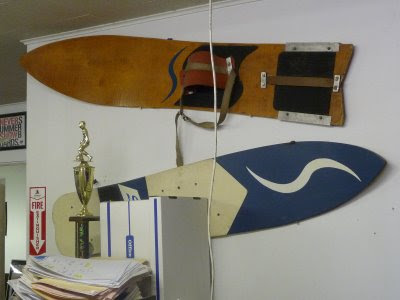 On another wall: know your roots.
Before Never Summer, they were Swifts
(now the Swift is a longboard in their line)

When Gags had to get back to the grind, the invaluable Melissa brought me into the factory where the decibels are cranked and instruments of mass recreation are produced every day. Step one, the cores. 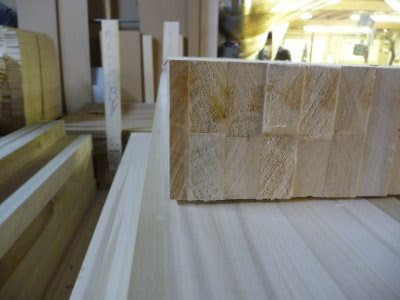 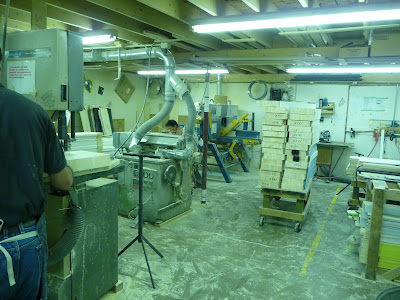 Home of the Flight Core Program 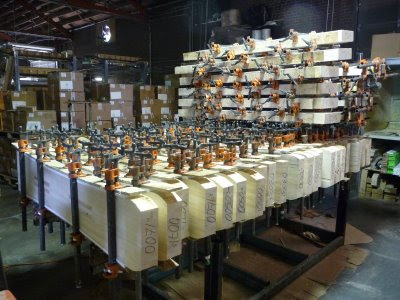 This is almost the last shot of snowboards in the set.
Most of the production on this day was skis and longboards. 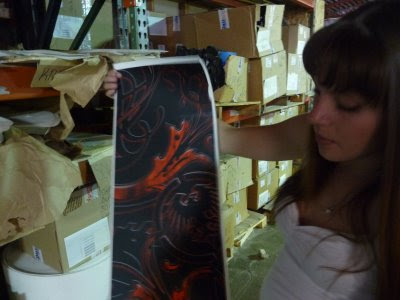 Next up, a topsheet graphic. Here, Melissa shows off a longboard base graphic sheet.

Graphics are the one thing that is not done in this facility. NS has a different facility where the sheets are actually printed and put together. It is, of course, still in Denver, which allows for quick turnaround on things like color correction. Jeremy and the rest kicked ass on the graphics this year. I honestly think they have one of the best lines I've seen as far as topsheets go. Check out the photos at the bottom of the post. 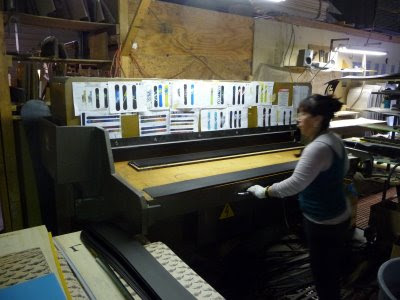 You've heard of die-cut bases, this is the machine that does it.
Cutting blocks of p-tex into the patterns you see on bases, this one a pair of Icelantic skis
You might think they're one piece, but all Never Summer bases are die-cut 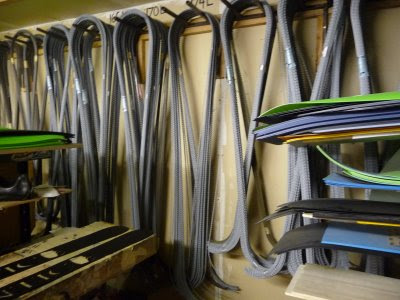 In the foreground on the left you see the die-cut, Icelantic ski bases.
In the background, edges. Each edge is made specifically for each board. 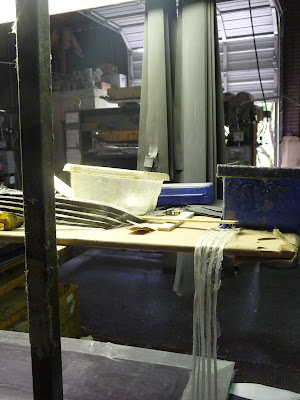 More building materials. Hanging are wide strips of rubber which wrap the board inside the edge to dampen vibration. On the shelf you see some carbon stringers which add stiffness.

The final, unpictured piece of a board is fiberglass. Never Summer uses three different types of glass in their boards: a two-angle (0° and 90°), a three-angle (0°, 45°, 90°) and a pre-tensioned fiberglass (called STS) that's the same type used in a bow string. Never Summer does leave this STS glass out of one men's and one women's model for a more affordable board. Without the STS, however, NS only warranties the boards for one year instead of their normal three years on all the boards with STS fiberglass. That should tell you how important this one material is to the production of Never Summer Snowboards. 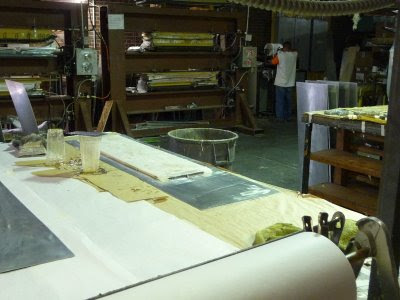 Here you can see a board (again a longboard) finished with the layup process.

All the layers of core wood, fiberglass, rubber, carbon fiber and p-tex are put together on their individual molds with an epoxy that is activated by the heat of the presses. The molds are so important, I wasn't even allowed to photograph them. In the photo above, you can see the aluminum sheet that the board lays on. This is the mold. They are shaped specifically with an indentation that matches the shape of each board. That's how the board gets its shape. The most important asset at Never Summer is the people who work there, but the molds are a close second. Melissa's words... 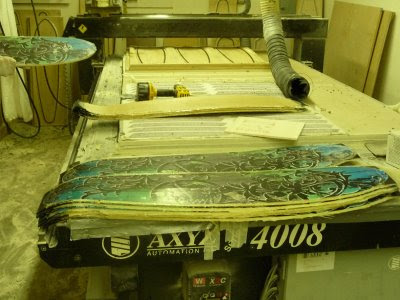 Here we have some boards out of the presses waiting to have the excess material router-ed or CNC-ed off from around their edges. 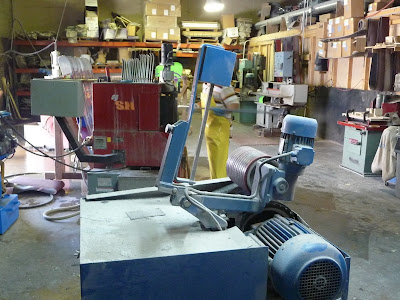 Almost done. Finishing touches such as base grinding and edge sharpening go down here. 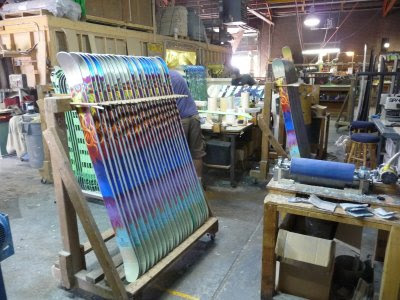 The blue roller puts on that factory wax, the boards are engraved with a serial number and the boards are ready for a scrupulous round of quality control. With everything fully running, NS can produce over 100 boards a day. 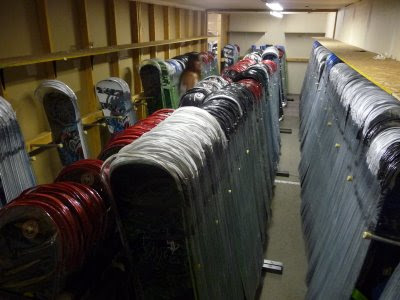 Finished, 1st quality boards are bagged and sent to shipping.
Still in the NS headquarters, this is their most guarded room.

There you have it, start to ship production of snowboards here in the good ole US of A. What better way to celebrate our independence (or close enough) than to check out a manufacturing facility that hasn't sent jobs overseas. Advantages of that choice include faster turnaround from R&D to production, the aforementioned graphics turnaround, and on-site warranty work means a fast turnaround (and trusted quality) in that department, too. Also, fully trusting the factory workers means that defects and seconds find their way to shops less frequently. The staff have a personal relationship with the product that you might not get at a big plant that makes boards for dozens of companies. Call it a constant quality control.

To be fair, NS does make skis for Icelantic and Fat-ypus and they've made any number of promotional snowboards. They'll make boards for anyone who can get together the right package of numbers, from beer companies to car dealerships. The big reasoning behind this is to keep the factory moving and avoid downtime. The less starting and stopping, the more efficient the process runs. Speaking of efficiency, Never Summer operates mostly on a made-to-order basis. While it may cost some time if they have to fill an order mid-season, they make it up with less costly inventory reduction at the end of the year.

Now how about a look at next year's boards. Here you go, ladies first... 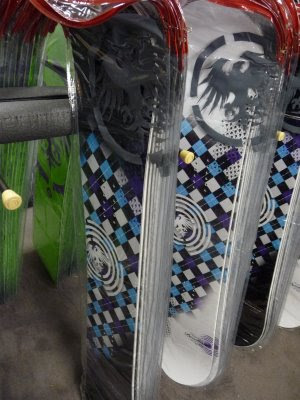 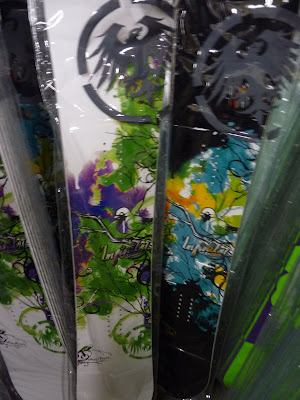 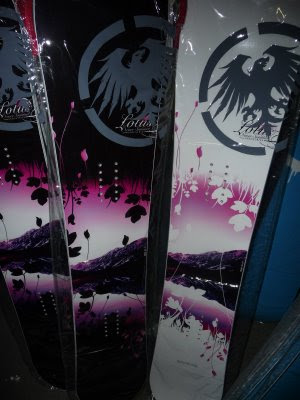 Women's Lotus (Melissa's board of choice) 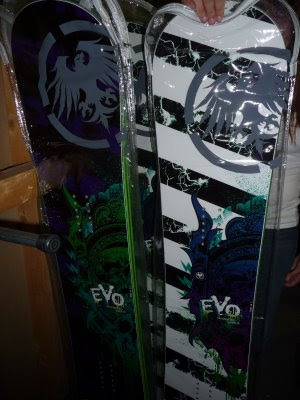 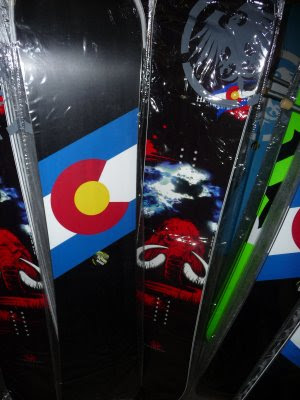 Heritage (limited edition of 950 and one sick topsheet) 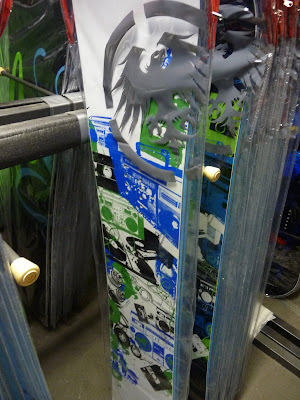 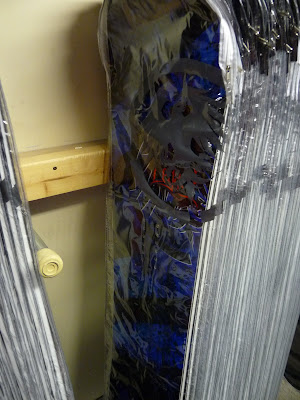 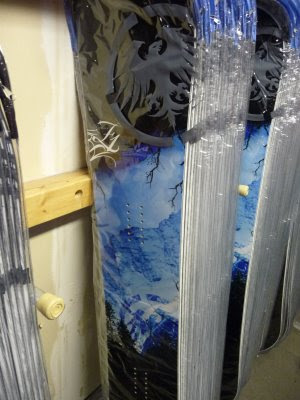 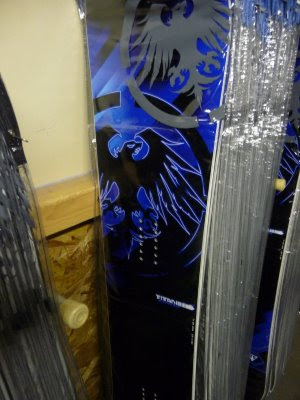 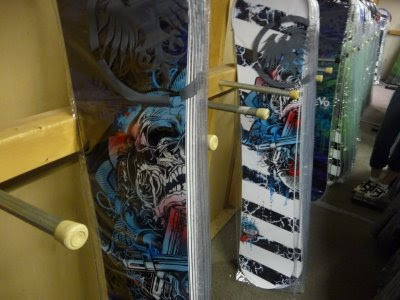 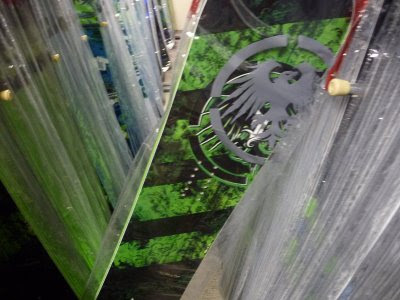 And I think that's the whole line. I hear they make killer longboards, too, but that's a whole 'nuther blog. I'd like to thank everyone over at Never Summer Industries for the welcome. Melissa, thanks for taking time to give me a personal tour. Also one last word about this guy... 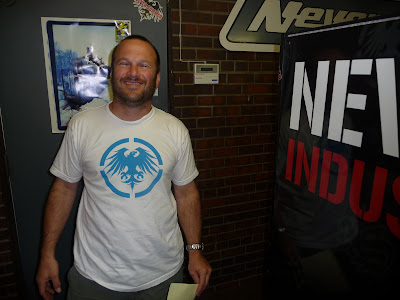 Gags started his professional life as a 9 to 5, suit and tie kinda guy working on the east coast and in Chicago. Then snowboarding changed his life. He dropped it all and has worked his way up the industry ever since, starting on the factory floor. His passion for the shred is evident from 'hello.' Oh, and did I mention that he literally saved my ass from hitting the floor when I had a seizure at Baldface? Never Summer is lucky to have that one. Maybe give him a bonus or an extra pow day off or some such.

If you made it this far, you must have found intrigue somewhere in my telling. A couple other sources out there have some great info, too. First of all, this 10-minute tour guided by Jeremy has that certain shine only video can deliver. Also, shayboarder has a write-up similar to my own. She's got a standing with NS somewhere below employee, yet above casual fan. Not exactly sure what. Board tester? Take it for what it's worth. Finally, I've only ridden one NS board, it was the 2010 Premier F1-R and you can find the review here.

Any other snowboard companies doing manufacture west of the Mississippi? Shoot me a line. I might just be in your neighborhood on some random road haul. All others, feel free to comment, complain or suggest...
Written by BoredYak at 11:30 PM