Still no snow on Hood, so here's a little story about the premier of Burton's new movie, It's Always Snowing Somewhere to tide you over 'til the flakes fly. 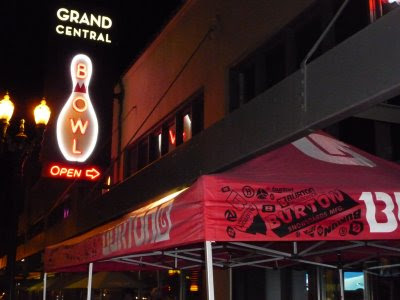 The Burton team just rolled through town lighting up screens with their team video It's Always Snowing Somewhere. A quick check of the interweb reveals that as of the time of this writing, it is snowing in New York. Veracity aside, Burton came original with this stop and rented out Portland's Grand Central Bowl for the night. In addition to free food and drink, they put up for free bowling. Not only that, but bowling with team riders. Usually at these events, you'd be lucky to blurt out, "I'm your biggest fan," before you're hustled through the autograph line. 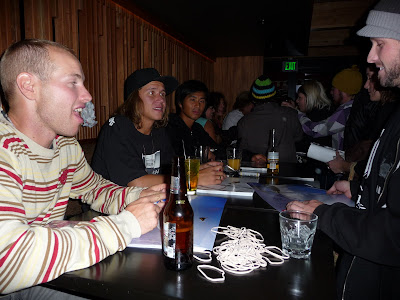 Tonight, fans had a chance to chat it up with the pros between frames. Most of the Burton crew was in the house. In addition to Jussi, Heikki and Tadashi other team members on hand were Danny, Kevin, Keegan, Luke and Natasha. With last spring's US Open on the screens as the crowd rolled in, I can just hear it, "Hey Kevin, good job on the TTR championship last year, but what happened on that last spare pickup?" As a bonus, fans were rewarded for strikes and spares with raffle tickets for the enormous giveaway at the end of the night. 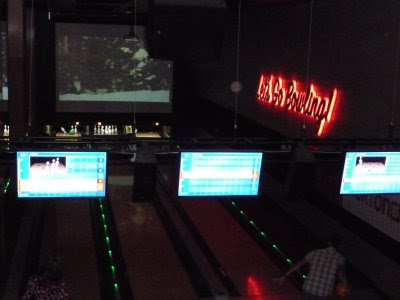 I was still rolling rocks when the main feature started, which was fine because you could see at least 10 screens in any given direction. Gigi Rüf must have some sort of stipulation in his contract because it seems like he always has the opener. He slayed it, as per usual. Burton will miss him for sure. It's OK though, when you've got backcountry rulers like Mads Jonsson, JP Solberg and Mikey Rencz. Their session in the sticks was sick. Overall, the riding was as good as you would expect from the Burton crew My biggest complaint was the music. Some of the choices were flat out wack. Really though, if you get the DVDs and can't handle it, just hit mute and put on your own soundtrack. And yes, I said DVDs as in plural, they have one for the Northern Hemisphere and a second one for south of the equator, meaning two movies for the price of one. If you're down to catch the crew in action, except for Kevin Pearce who filmed with Absinthe this year, get to your local board shop and pick up a copy. Then get stoked because if it's always snowing somewhere, you might be there soon.
Written by BoredYak at 9:55 PM