Baker Banked Slalom Final Wrap: Banks for All the Memories

Some riders ran their 25th race and won gold, some crashed out spectacularly in their first showing. Personally, it was my third Banked Slalom and I've never made it into the race. I have made a bunch of friends and had some good times along the way. Here's a sampling of what I take away from this year.
This year, I spent more time riding with friends and less time on things like checking out the race and demoing boards. In years past I didn't know as many people, so I watched the race, rode groomers on demo boards and met some folks. Now things are a little different. It always has been kinda my style to show up solo (in this case, I had a place to stay with parents of a friend) to some event that I've heard is fun, but I don't know much about. From there I proceed awkwardly until I meet people. You youngn's might not know, but this is what social networking was like before the internet. 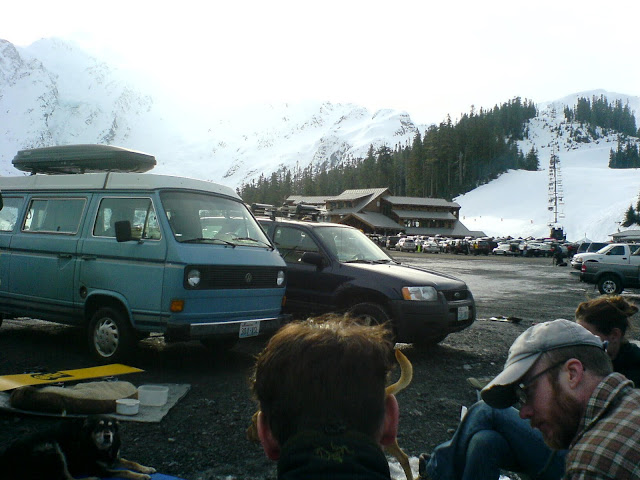 Side point: there's something for everyone at Baker Legendary Banked Slalom weekend.

Baker's got some great terrain and I finally had friends to take me to the goods. Thanks for some sweet riding everybody!

In a squeaker in the Older Amateurs division Tom 'T-Bird' Monterosso of Snowboarder Magazine fame and Colin Wiseman of frequency The Snowboarder's Journal qualified last and second to last respectively. Before their finals runs on Sunday, I asked if they had anything riding on the outcome. T-Bird jokingly suggested the loser write a 2000-word feature for the winner's magazine. They settled on something a little more gentlemanly: a beer. At the end of the day Sunday, by a margin of about a second and a half, T-Bird was adding another couple bucks to his expense report and Colin was sipping some sweet, free suds. There's your glory, Colin!

Speaking of the Older Ams, Gwyn Howat says it was a first, so I'll believe her. She thinks it's the first time Baker locs have taken a clean sweep of the duct tape in a division, that's just what Craig Newbury, Josh Charles and Jack Freysinger did. It pays to know the course.

Speaking of knowing the course forwards and backwards, Sunday night before the gates were plucked, one extra race was set. One run, winner take all, switch. With $75 on the line, Rob Kingwill took home the largest cash prize ever at the LBS. At the ceremony, he pledged to spend it that at Milano's in Glacier on his fellow competitors.

A standard place to stop for morning coffee and pastries on the way to Mt. Baker is the Wake n Bakery in Glacier. They have a funny little sign inside that says something like 'Astronauts like Hot Tang.' One morning I bought a scone and they asked if I wanted anything to drink, so I said jokingly, 'I'll have a hot tang.' Turns out the joke was on me. They actually serve it. I opted for a small and it wasn't nearly as bad as a steaming hot, artificially orange beverage could be. Courtney, the proprietor, insists it's the ultimate hangover cure. 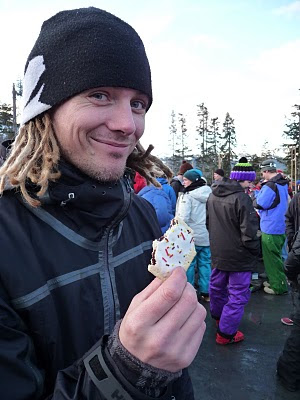 One Norwegian's first exposure to Pop Tarts
With that the 25th Legendary Banked Slalom is one for the history books. Snowboarding fast through some twisty gates with your friends. A course that challenges kids age 9 to 69 and pros of the highest caliber. Eating salmon and drinking beer. If that sounds like a good time keep an eye on lbs.mtbaker.us and come check it out next year. If not, there's an event in Vancouver coming up that might be more your style.
Written by BoredYak at 11:36 PM