The Rep Said: This one's an all-mountain charger with Zeolit, the fastest base we've got. 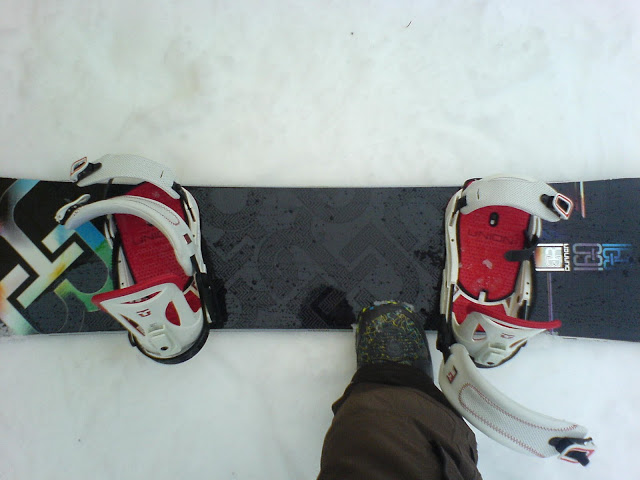 The Ride: It's supposed to be fast, you say? First stop, weaving through traffic and making a slight uphill traverse to the other side of the mountain. That oughtta test it. Just when I thought it might slow down, it didn't. I don't know if it was faster than any other board, but it just... kept... going... maintaining speed like no other. And it made this sound like it was sliding down a zip line when I carved at speed. Or was that just in my head? Speaking of carving, the first time I tried to rip a heel-sider on some hardpack, I went straight to my back. Even though I was never able to recreate that on other parts of the hill, it doesn't bode well for the Burner's edges. A board that's designed for that kind of speed should be able to rein it in with a hard turn. The last thing you want is a lack of confidence in your edges. This one's all about drawn-out, long-radius carving. That is, when it's not straight-line blasting, which is definitely the main attraction. Not an exceptional amount of spring off the tail, but it soaked up whatever I was to fall off.

Bottom Line: The Salomon Burner is a quiver board with one thing in mind, charging hard with the nose (not the tail, it's a tapered directional) pointed straight down the fall line. It's stiff, stable, damp and fast. Not for the timid, green groomer cruiser. Not for the bedazzled, bandana-ed trashcan tapper. If you're after speed, we've got your stick. Light up a Burner. Any questions? Ask Salomon.


Similar Boards: Burton Supermodel X
Written by BoredYak at 5:59 AM