How the Northwest Was One

Another day, another original movie with the Northwest front and center. This time it's got a sub-story of lawlessness and bounty filming complete with guns and horses. At least the snowmobiles are dubbed to sound like horses... The Seattle premier went down at a fire code disregarding Evo. The place was so packed I was picking out the nearest emergency exit (keeping in mind that the nearest exit may be behind me, it wasn't). The vibe was intense enough for the show that most of the dialogue between parts was lost for the crowd's excitement. That probably just helped sell more DVDs. It didn't hurt my choice. Afterward, music by The Senate Arcade, art showing by Spacecraft, beer by rogues entering through the windows. Then, I drive three hours home. Bitchin'. Now, howza 'bout I tell you about the movie? 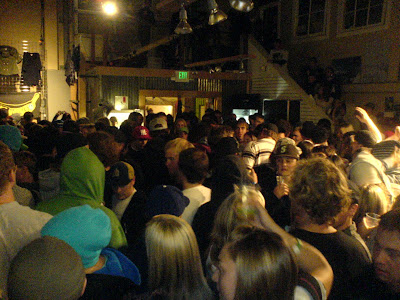 Yup, 360 degrees of that.
Nick Ennen sets the pace that doesn't let up, except for the mini skits. Severe backcountry action is the name of the game: big gaps, heavy cliffs and a pillow field big enough to run a hundred person Chinese downhill. Blatant Holy Oly and Mt. Baker shots. Jibs in this movie are generally made of wood. Andy Bergin-Sperry tweaks and pokes more than a dude whose girl just got a boob job. Camera dwarfing powder tsunamis roll in from every other part. Manuel Diaz and Joe Bosler are each on the double cork stagecoach. Is that just a given anymore? Seems like every movie's got at least one. Shaun McKay has one of the funnier mini skits and one of the better parts.

Clocking just over half an hour of video, this flick keeps the hits rolling. The storyline is funny and helps to break up the action. Maybe some of the shots could have been tighter or crisper, but in the end, it was good enough to make me daydream about hitting some of the soft stuff myself. It was also good enough for me to put my money on the table and walk out with a copy.

In fact, if How the Northwest Was One doesn't make you want to get out and ride, you're probably the sort of person who prefers to ride icy halfpipes while it rains razor blades and demon heads and Sarah Palin blabs full volume in an unstoppable speaker from above. Maybe you're looking for How the Northeast Wasn't Fun. (If that title ever gets used for anything, I want a dime for every copy sold!) Catch it (the good movie, not the one I just made up) Thursday night (10/8) in Bellingham if you know what's good. 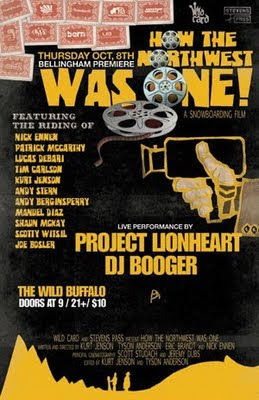 Email ThisBlogThis!Share to TwitterShare to FacebookShare to Pinterest
Labels: how the northwest was one, snowboard video, video review