Ask for a B-Movie and That's What You Get

Old habits die hard. I've gotten into this habit where I feel it's acceptable to drive three hours to see a snowboard video. Even when I have no one to help with gas money. That's how badly I want to see some new snow footage. That's how badly I miss winter. Burton provided my fix this time. They promised a free video in Seattle and I was powerless to resist the siren song of the highway. 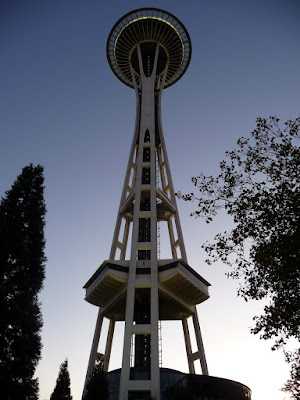 Even closer to the Space Needle this time.
Not just Seattle, but the IMAX theater at the Seattle Center. Who hosts a free, check that, two free showings at an IMAX theater? Burton, that's who. Rumor has it a bunch of pros were at local core shop Snowboard Connection signing autographs before the show. My exit off the highway was shut down, so instead of driving right there, I drove around in a big circle for half an hour and showed up after everyone left. They were also out of the free tickets for the show. Who makes a premier free and then tells you that you need tickets? Yup, Burton. Time to show up at the venue and see if I can scam my way in.

When I got to the venue, the line was small and no one had extra tickets. Then again the first screening just started and it was 45 minutes 'til the next. Just enough time for me to find something else to fail at. This time I chose eating chowder. The first spoonful burnt my tongue, so did the second one mere seconds later. It tasted so good, though. By the time I was done with the bowl, a couple guys showed up with stacks of tickets to give away. No scamming necessary. (Turns out the theater was only half full in the end anyway, so much for the sellout.) Time for the show. 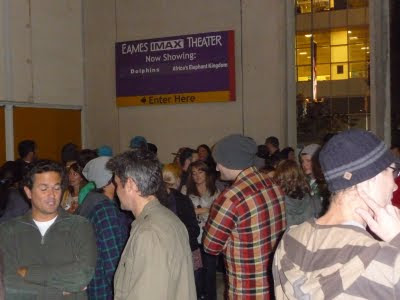 I hate to spoil it for you, but the new Burton movie is about dolphins.

They evolved from humans, you know...
On the way into the theater, free swag bags for everyone! Seriously, who does that!? You guessed it. My mellow bag had a shirt, bar of wax, some stickers and a lift ticket to Stevens Pass (everyone got these). Others had sweatshirts, hats and Golden Tickets that turned out to be good for a free board (3), a set of luggage (1) or a season's pass to Stevens Pass (1). Wow. I only saw one person walk out of the early show with a board, but still that's a ton of free shit. Pretty decadent, that's for sure. Wait, there was a movie, too! Let me tell you about that.

The first thing they show is the giant B feature. Can you believe that? They have this one huge feature that would be shocking to build up and then blow people away with at the end, but no, they blow it up first thing. And no one even hits it yet, they just show it off for the intro. Then at the end they try to build it up a little and I'm sitting in the audience thinking, "What, that big 'B' you showed first thing in the intro!?" Please. Here's how you do it. Show everything but the 'B' in the intro. Give a little build up, then hit the credits. Then re-build at the end and give 'em the payoff. How hard is that? Seriously.

Anyway, that aside, what's worth mentioning? Keegan Valaika breaks himself off heavily in the opener. In between sessions of torturing himself, he tortures some urban features. Nicolas Müller is one of my favorite riders and his part is my favorite in the movie. Nicolas in backcountry powder. How can you go wrong. Just push record. He seems like one of those guys who makes filming easy. Vintage stuff. The 'fun with friends in pow' part leading into his was, well, fun too. We get a taste of Shaun White in his not-so-secret-anymore backcountry Silverton, CO halfpipe. It's amazing pipe riding with more corks than jumps, if you know what I'm getting at. When he falls and they make a big deal out of it I think back to Keegan Valaika's part and how much harder he fell and how they didn't make a deal out of it. He was probably working on his Olympic run, so if you want to see that in advance, check it out. Jeremy Jones had a pretty good part. I've always like his riding and he's got some new tricks. He's perfected the one-foot 360 shove-it(?) and does a few of them in tricky situations. I loved his 'Propery of MDP' had, too. Then, guess what ends the video? Yup, the giant session on the 'B'. It was interesting to see all of the things they could do simultaneously. Some circus shenanigans, for sure. I'll say it was the best conglomeration of park features in a single place. Why couldn't they have just kept the secret? 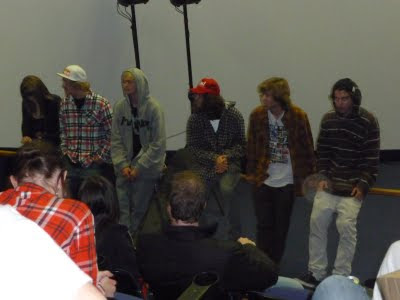 I ain't Blotto, left to right: Spencer O'brien, Mikey Rencz,
Mikkel Bang, Danny Davis, Kevin Pearce, Mason Aguirre.
In the end it was worth my time. The problem is, I had to think about whether that was actually the case. When you have a name like The B Movie, you're setting yourself up to be second best and in my mind, that happened. It just wasn't as good as it could have been. Another gripe that just occurred to me. During the multiple rider segments, they just didn't title any riders. Especially at the end, when 40 or 50 different riders are hitting the B, I had no idea who was riding. That's the sort of thing I could have missed during a premier atmosphere, though.

Overall, plenty of top-tier riders, but a B-tier movie. Make no mistake, it made me want to get out there on my own board. If it comes near you on tour for free, it's worth the price of admission. It's just not one to buy. Save your money for Absinthe or a lift ticket.
Written by BoredYak at 10:49 PM