South Central... USA That Is

I can't believe I'm only as far as Louisiana on the massive road saga that was my summer vacation. 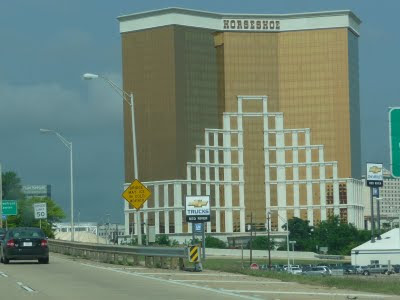 Giant casino in Shreveport, where I inexplicably let them keep their money.

On my way out of Cajunland, I made the mistake of eating at a Waffle House. The waffles are pretty poor actually. Mine was limp like a pancake, but had that 'hanging out on a bed of nails' waffle look. A pancake in waffle's clothes. I like my waffles crispy outside, soft inside. Dual textured. Is that too much to ask?

Next on the list of letdowns, Texas. I took some side roads and not interstates so much and what view awaits me but that of coal mines and oil pumps. Not that rad. Mind you, I'm not out cruising gravel county roads, these are paved highways. The oil in ND is a little farther away from the prying eyes anyway. 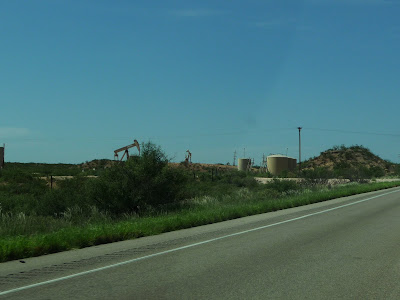 Soon enough I was in Austin hanging out with my sister's family. Aside from the fact that they were in the middle of 40-some-odd straight days over 100°, times were fun. We consumed our bodyweights in brisket and played hours of games. To those of you who haven't played games in a while, they are getting better year by year. We played one that involved killer bunnies and another that was a self-deprecating D&D type. What's that, you ask? Of course they can be turned into drinking games. Can't everything? I'm still laying off the sauce (mostly) until the doctor says otherwise.

Also in Austin is a good friend of mine who I met many years ago at a punk rock show in Madison, Wisconsin. Tamicka and I are still in touch after all these years and we shared some of the best barbecue I've ever tasted. We also watched the bats emerge from under the Congress Bridge. Turns out Austin is home to the world's largest urban bat population. Some 1.5 million of the flying rodents. They're super helpful, too, eating up to 30,000 pounds of insects nightly. Maybe Williston should import some of those to deal with the mosquitoes...

West Texas is about as boring as they come. Drive fast and get to Carlsbad Caverns while you still have your sanity. Use the elevator (seriously) down to the Big Room as your decompression. Then prepare to be transported to some sort of otherworldly sculpture garden. 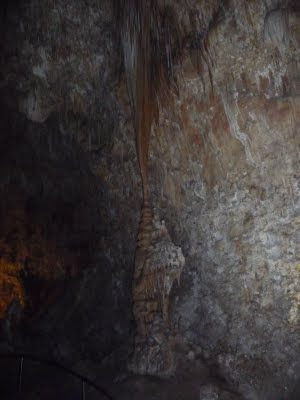 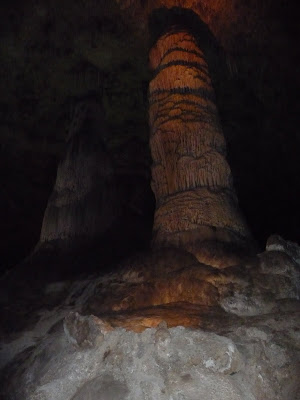 Here's the obligatory 'the pictures don't do it justice' statement. Some perspective: the room is 1/4 mile long and hundreds of feet tall. My on-camera flash just didn't cut it. Check that place out if you're near southern New Mexico ever. They also have a few hundred thousand bats that come out to feed at night. They have a little amphitheater set up at the cave entrance, but they don't allow photos. Seriously, they built an elevator to get to the caves, but they don't allow photos of the bats? I guess it's for their own safety. I'll allow it this time.

After being assured that the drive from Carlsbad Caverns to Albuquerque was miss-able enough to do in the late night hours, I set out through UFO country. Wouldn't you know it, I saw one! Either that or it was one of those Perseids, but I'm going with UFO. It was super bright and it arced through the sky for at least a second or two. Like a really bright falling star. Come to think of it, it was probably a Perseid. Rad enough to keep me awake for a little while anyway. That is, in fact, a boring-ass stretch. Little towns and huge oil refineries are all you have to break up the desert monotony. Oh and giant factory dairies that you can smell for miles. I rolled into ABQ thinking I was dreaming... 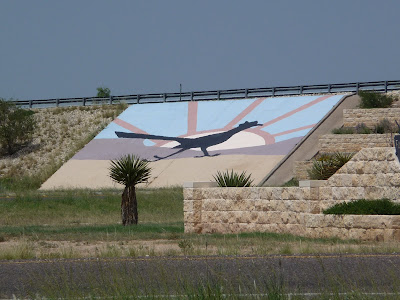 My buddy calls the place North Mexico, turns out they mostly speak English.

If I take one thing away from Albuquerque (besides the dust), it's the amazing food. Actually, I did take some of it away and I left it in my friend's fridge in Salt Lake City. He agreed as to its amazing-ness. Adobado. Remember that word. It means extra-fucking-hot-and-tasty in Spanish. I had adobado pork ribs, ate the same dish two days in a row and still had enough leftover to (accidentally) leave some to SLC. That speaks more to the portions at this place, but the quality was off the charts good, too.

Whew. Almost home. What do you know about the Black Canyon of the Gunnison River? Come tomorrow, you may know a little bit more...
Written by BoredYak at 10:04 PM