What is the End?

I celebrated Memorial Day the best way I know how, snowboarding. That's right, one more day. This time it was all about the park. Ben and I found out the hard way that the lower park was closed. This required a flat, Timberline-traverse (mostly one-footed as skating was necessary every few hundred feet) down to the lower lift. Finally we made it to the Mile and got a glimpse of the upper park on the ride. Best park I've ever seen (still never been to Mammoth or Whistler or any of those other places known for parks). Over 1000' vertical of features for every ability level.

Starting at the top riders have a choice of two lines: a beginner line with two, 20-foot step downs and a few smaller jibs or a more advanced line with some step-overs in the 50 foot range. Both lines funnel into a nice quarterpipe that actually slants from the ground on the beginner side up to your standard 18' (with a barrel and a mailbox on top). Downhill of the QP is a 50' table/hip combo followed by a long series of rollers, maybe 7 or 8. Then, another choice. I never rode right, but from the top I could see a series of medium-strength rails and from the bottom, a medium-sized table (30'?). The line that always had my attention on the left? Not really a line at all, just a run-in to a single, massive hip (frontside for regular footers including Ben and me). The deck topped out around 50 feet up. Not that I ever went that high. Here's a poor, phone shot of it. 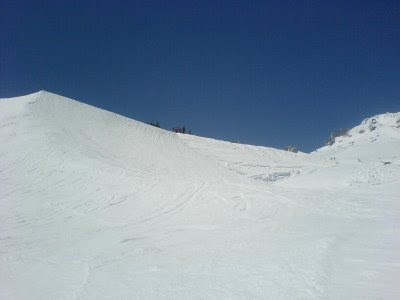 That's what happens when I leave my camera at home.

If you click through and look really close at the original, you can just see a rider leaving the lip. That's the best sense I can give of the bigness of it. It's about as close as I'll ever come to an Air & Style-type jump. The thing that got me was how long the run in was. You have so much time to think about how fast you're going and how much speed compression your legs are dealing with and how you can't see anything but the face of this bitch that I usually chickened out and speed-checked my way to a meager few feet of air. It was scary and fun all at the same time. Varying amounts of wax left in my base made things even more complex. I only caught significant air probably twice and they consisted of touching tindy and rolling down the windows. I'll get it next time.

Speaking of next time. As my title this post questions, what is the end of a season when you live by a resort that's open 'til September? How long do you have to go without to have the first day of the season feel like the first day? I took a month off when I got hurt, but it didn't feel like a beginning when I got back at it. Just another continuation. Snowboard seasons change just like natural seasons. Powder comes, turns to corn, then to slush. Some seasons are better suited to 50-foot hips some to 50-foot cliffs some to 50-foot-wide groomers. Sometimes you ride one of those wheeled contraptions and let your brain fill in the powder. Other times you open up a folder of DVDs and time travel your way to a better day.

Which reminds me, have you seen the new Isenseven teaser? So much fun!

Isenseven Let's Go Get Lost Teaser from ISENSEVEN on Vimeo.