If you were to name the first 10 snowboard companies that come to mind, chances are Aaron Draplin has worked for at least 9 of them. Beyond, hell, he's even done jobs for Mr. America-Episode 44-'A New Hope'-Obama himself. In the design game, this guy has turned it to 11 more than Nigel Tufnel ever did.

What I'm here to get across is that starting now (actually last night, hence the following pictures), Mr. Draplin's mastery can be found on the walls of Office at 22nd and NE Alberta, Portland, Ore. and you should open your eyes and turn your head toward it if you can. 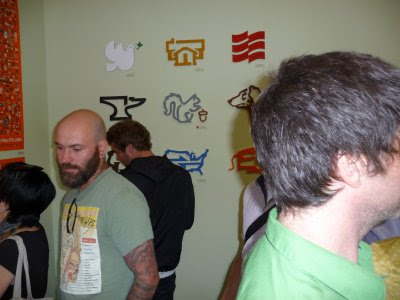 Why would you go see it when you can just check out his blog or stare at one of the countless pieces of gear with his visionary Hancock on it? First of all, you can check out a super-compilation poster with "Pretty Much Everything Up To May 27, 2009." That's right, all on one orange sheet. Second, that's not all stokes, he's got some wall pieces. Which leads me to an anecdote, but first, a picture. 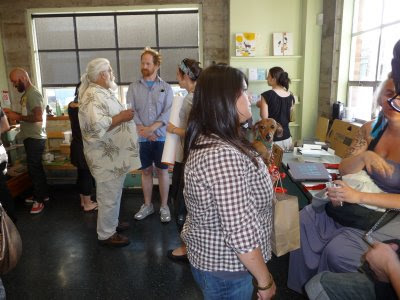 Fore: Gary - the World's Smartest Dachshund
Back: Jim - Aaron's dad (white hair, aloha shirt, bigness)
I was with some friends getting ready to head to the grand opening. My buddy's wife says, "I'm not going to dress up even though I look like a soccer mom," to my friend and I, who are both in t-shirts and jeans. I'm about to say, "That's OK, he's not a 'real' artist," but catch myself right around the 'real.' My meaning was, he's not 'that kind' of artist. You know the kind, the martini-sipping, beret-wearing kind. Truth is, he's as real as artists get and we could use more artists like him. A trite complement, to be sure, but here's why: Passion. If you've ever read one of his blog posts (and I mean really read, followed all the links and looked at all the pictures) you start to get the idea. Logos from every epoch, continent and vocation. What sealed the deal for me, though, was this video.

America Is F*cked.......(Graphically at least) from Jess Gibson on Vimeo.

Emotional stuff. Did you catch the spot towards the end where he nearly cries? He's legitimately concerned about the future of his craft and has true respect for where it's come from. I wish someone was out there to go off on me like that when my work wasn't up to snuff. After all, how is anyone ever going to get better? It would make my day if he wrote a letter to the sign company in Sedalia. Give them a piece of his mind, maybe send some links to some good work for inspiration. That's why we need more artists like him, hell, more people like him. People who give a shit. I'm against institutions in general, but if anyone is fit to start one, it's this guy (and Robin Williams from Dead Poets Society). Draplin Art and Design Institute, DADI. I want a nickel for every item that sells with that on it. Ha. Rambling. Here I am talking about living with passion while typing away indoors at the new idiot box. Moving on... 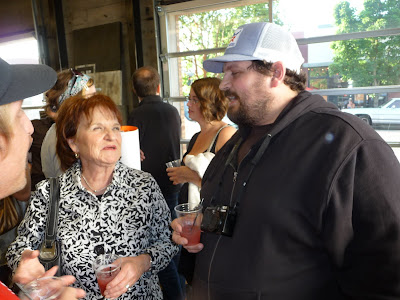 The Aaron I met at the opening was friendly and social, then again, it was his party. Vodka drink in one hand, he spoke candidly about the show.

"It took more time to put the stuff up on the wall than it did for me to make it."

"I started planning this 5 days ago!"

Comic hyperbole or technical mastery? Everything he says could end in an exclamation point. He was always keeping people laughing and bringing passersby into the mix. Percentage of passersby who were new to him: probably pretty low as most of them were members of the Portland shrederatti. Oh yeah, he's from the Midwest, too, so he gets bumped up a couple extra rungs on the rad ladder just by picking the right parents.

If you missed the opening last night, you'll never get it back (at least not without some serious pull). Hurry and you can still check out Draplin's work at Office, 22nd and NE Alberta, Portland, Ore. Buy some field notes while you're there.
Written by BoredYak at 12:11 AM