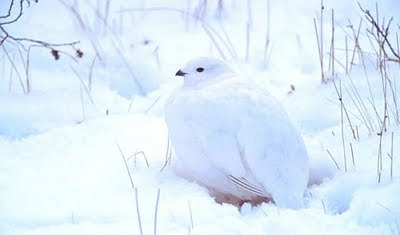 Alaska's state bird is the willow ptarmigan. It's a member of the grouse family, but to the uneducated eye, at a glance, it looks like a dove. I mention this because when you blast a toeside turn and the resultant rooster tail makes a flock of these fowl erupt in front of you, it's enough to make you think you're in a John Woo movie. Best move is to come out with both guns blazing. Slash first, ask questions later.

There's a chance you may come across a man biking down the Richardson Highway toward Thompson Pass with a fully-grown falcon perched on handlebars. Do not be alarmed. This man is probably trained to rescue and rehabilitate raptors. You know, mommy bird style. I didn't ask if he ever vomited into the young bird's mouth, nor if he taught it how to "sick 'em."

The King of the Hill contest went off the very same day I went for most of my riding. Those blue skies make things get done. We did a flyover on our way out and things were getting going. Weird to see a bunch of sponsor tents set up at the bottom of Bro Bowl: a 10-minute sled ride for all involved. Check out a write-up with the above and more quality photos at snowboardermag. Another quality piece including full results at ESPN. Congrats to King Will Brommelsiek and Queen Holly Enderle. Hip hip, hooray and shit.
Written by BoredYak at 9:28 PM