Ever wish you just didn't have to go outside to enjoy all of your favorite activities? Anyone out there rather fork over admission to do something that was otherwise free? Yeah, me neither. Just in case you did, nwbroweather put me up on these guys. 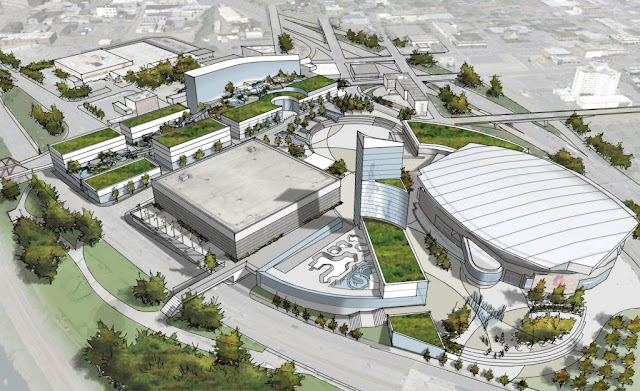 Just look at this beautiful rendering.
After making sure it wasn't April Fools Day, I'd say they appear to be serious. Skateboarding, surfing, bmx-ing, white water-ing, all indoors. I know what you're thinking, 'Where's the snow dome?' Cheapskates. Initial impression: Looks cool, but don't hold your breath. Unless holding your breath for 10 years is no big deal, then go ahead. Your kids might dig it, though. It's like being outside only without such harsh realities as sun or rain. I bet there isn't much localism on that wave. I also bet they try to fund it publicly. Actually, this thing could be just in time. If it ever gets built, it'll probably start up right about the time my body starts shutting down. That wouldn't be so bad. If it had a snow dome. Then I could finally surf, skate and snowboard all in one day.

Final impression: Why doesn't the parks department just build a covered skatepark?
Written by BoredYak at 12:20 AM