10 Ways to Save Money on Snowboard Gear

In the style of that creepy old dude, David Letterman, tonight's top ten list! From the home office in Moose Jaw, Saskatchewan (Best. City. Name. Ever.) Top Ten Ways to Save Money on Snowboard Gear. You won't find any talking reptiles here, just practical ways to spend less money while still getting the gear you want. Here we go (in no real order, I just happened to have 10 of 'em.)

#10) Buy used. Sometimes you can find perfectly good, gently used gear. Check the craigslist nearest you. Deal locally, deal in cash, check it out before you drop the dime. Also check second-hand stores, aka thrift shops, aka the bins. You never know. A friend of mine got some goodies that a magazine editor was dropping off at a local second hand store. True story.

#9) Buy last year's gear at the beginning of the season (like right now). If you need the next level shit, you pay the next level price. You want nearly the same stuff with a different color scheme from last year, get yourself an 80% discount. So easy.

#8) If you can wait, do so. Gear starts going on sale around March and prices spiral downward 'til right about now. I do most of my new gear buying in the April/May range. I've bought goggles and boots for half price. This works for any sport that has a season. It's that supply demand thing that you slept through in economics.

#7) Raffles. Seriously. Go to video premiers, rail jams or other events and buy raffle tickets. A new board goes for up to $400 and you can score it just by dropping $40 in raffle tickets. Even if you don't win the money goes to a video production company or a charity or something. Everyone wins! Plus some of these events are so empty you're all but guaranteed to walk out with something. If people didn't like to gamble, Las Vegas would be just another cave in the desert. Or just do something crazy at an event. I've been growing my hair about four years. It's nipple length. Now it's gone. Traded in for a free snowboard. All I had to do was have my friend cut it into a mullet and I was guaranteed to win the 'best bad haircut' contest... 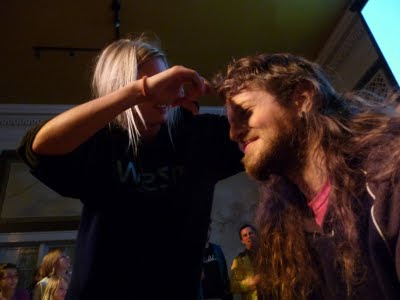 #6) One-deal-at-a-time websites. I will always advocate buying from your local core store for most purchases. Sometimes, saving money takes precedent over all the buy local hoo-rah. For those times, check out the Brociety. They just had Dragon Rogue goggles in five different frame/lens combos for $55 and Roxy's Ollie Pop board (last year's) in three sizes for $175. That's what we're working with. Not cutting edge new gear, just stupendous deals, one at a time. A handy alarm feature tells you when the deal's up and a fresh one's on. The best time to use this is when you're looking for 'some good pants,' if you're looking for anything specific you'll never get it. Warning: addiction possibility...

#4) Get a job. Preferably at a shop, snowboard company or resort. Then you're in. The money you save on gear and/or lift tickets is like earning two paychecks.

#3) Find the big Expo sales. Right now in Portland and soon in Seattle an agglomeration of snowboard retailers, companies, charities, resorts and all things shred are collecting in a big exposition hall hawking their wares for pennies. Snowboard swap meet. Find one near you, get there, save money.

#3b) Also coming soon to Portland is the Northwest Ski Club Council's Ski Fair. This might affect my chances of scoring a deal, but you should go anyway. This place hosts resorts from across the country. They all have silent auctions for lift tickets or lodging packages. It's like gambling with your vacation time, but again, who doesn't like to do a little gamble ramble? Last year, I took home three lift tickets to Jackson Hole for the minimum bid of $90. I saw Mammoth tickets that didn't make the minimum bid. Colorado, Utah and Montana were also represented. Of course the Oregon and Washington stuff went fast, but if you're planning a big trip anyway, you could walk out feeling like you stole something.

#2) Make friends. Shop kids, reps, pros, rich kids, bartenders near shops. Write letters to magazines. The best letter to the editor always wins something. Get creative. Maybe start a blog. If enough people read it maybe you get something free. Hasn't happened for me yet, but I'm just waiting to go from getting stuff at a discount to actual freebies. The box is probably in the mail. Then, I'll have made it.

#1) Make what you have last longer. That's right. Just don't buy anything. Maintain and repair. You bought it for some reason in the first place, make it work. It can't be that bad, can it?

The ability to reason is what separates us from the animals, but money is right up there. It makes the world go 'round and if the world didn't go around the sun we might not get winter. Then again it might be winter all the time. Just depends on the hemisphere, right? How's that for reasoning? Anyway, take what you've learned here today, spend less on your next shred buy and save some away for a snowy day.
Written by BoredYak at 9:09 AM