Sweet 16. So important MTV has a show for the parties and another show to comment on them. On said show, over-privileged and out-of-touch adolescent girls (and even some guys) basically do their best impression of Scrooge swimming in money. They spend thousands on clothes and tens of thousands on bands. They cry when daddy doesn't buy them the Land Rover or mommy takes away the credit card. All in the name of an exclusive sweet 16 birthday party. This world doesn't exist in my reality. The closest I've come is a party with free snowboard movies and some snacks. Let me recount to you this lavish soirée. 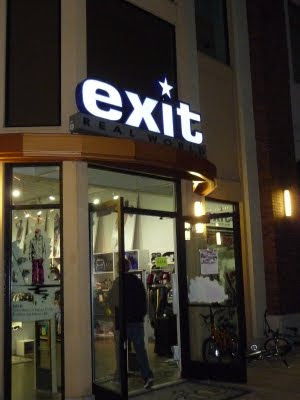 Exit exterior.
Portland skate/snow shop Exit Real World turns 16 this year and to celebrate they're throwing three parties. How's that for sweet? Party number one was at their Bridgeport Village location. On the docket was the People Creative's new offering, Nice Try. But what's this? A surprise late entry from Foreground productions entitled Rotate. Good to see the local kids getting together and laying down a bro movie. Exit also wheeled out (pun intended) their new skate video teaser. Add some free energy drinks, candy, popcorn, what-have-you and the assembled masses were ready for blood. 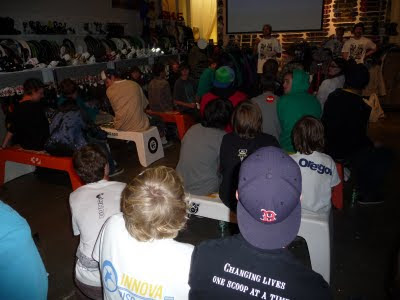 Bloodthirsty suburban teens.
What do you want from a snowboard movie? Rails, powder, park, backcountry freestyle, big lines? Gimme a break, videos are getting more diverse every year. Last year's "stunningly well-rounded" is this year's "complete, yet lacking creativity." We need more. Double corks? I hear the Chinese are already on to double corks. Next thing you know kids in North Dakota will be doing them. What else? Sketchy avalanche saves? Yawn. How about handplant to cliff drop? Do I have your attention now? Boy literally destroys rail? Snowmobile catches fire and melts into a different sort of watery grave while bewildered riders attempt to salvage gear? That sound like your kind of movie? Then give Nice Try a try. People Creative's navy sets to the frozen waves like the Spanish shred-Armada, plundering all powder and pillaging every park. Casualties are experienced in gnarly fashion, but in the end victory is claimed. 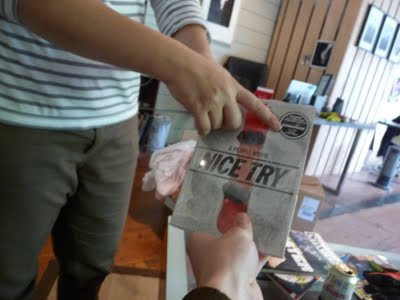 In the interest of full disclosure, Yobeat's Brooke Geery also gave me the DVD.
Marben starts it out by throwing methods in every possible circumstance. Yes, including urban. Robbie Walker demonstrates stylish slow rotations and double corks. Curtis Cizek, Louie Fountain, Bryan Fox, Jonas Carlson and Josh Mills get together on a pow bro fest or is it a bro pow fest? Hell of a fun section anyway with dudes slashing laybacks, dropping cliffs and otherwise making the flakes fly. Made me want to joint them. Shaun McKay, well, he's got a hell of a story for an insurance adjuster.