Pennywise and I don't mean King's IT Clown

Music is a powerful force. Aside from being a multi-brahzillion dollar industry it has the power to change peoples' lives. Joining a band and making music can help people express themselves, exhibit creativity and possibly get out of bad situations. Listening to music or going to shows is an escape for some that can help them out of the same sorts of situations while finding empathetic peers and building strong bonds. Music definitely has been a force that shaped who I am today and if I had to point to the most influential band in my life, that band would be Pennywise. 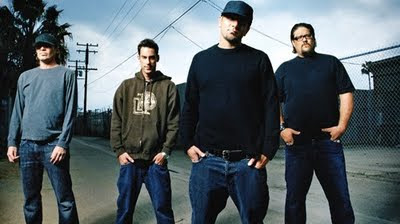 Pennywise was (from left): Randy, Byron, Jim and Fletcher
Now I can't remember the first time I heard Pennywise, high school is a bit of a daze. It was probably around the time About Time was on shelves. I distinctly remember Full Circle coming out... from a preview video at Wal-Mart. I don't remember the first time I saw them live, same daze, but I've seen them several times. One of my favorite things in live music is hearing Fletcher say, "Let's see some fucking action!" He says it every time and every time it results in people getting real!

The one thing that I will always remember about Pennywise is the recurring theme in their music of living each day to the fullest. One thing I distinctly remember is the first time I ever went to a ski resort. Montana's Big Mountain was the destination (said resort has since been renamed something I can't recall). Pennywise's About Time was on 'heavy rotation.' Pennywise and snowboarding were inextricably linked. Nothing helps me to live in the moment more than snowboarding. Fast forward a few years to my purchase of a CD player/alarm clock. After experimenting with a few discs to get me out of bed in the morning I eventually settled on Pennywise's Full Circle and it hasn't left since. For about the last five years, every time that alarm has woken me up it has been to the same song: Final Day. The album was dedicated to their friend and former bassist, Jason Thirsk, who committed suicide. This was their first album without him. The song revolves around themes of asking your friends for help, being true to your emotions and yes, living every day like it's your last. "Don't know when it's gonna come, your final day." Holy SHIT! What better way to get out of bed in the morning!?

Now the band has gone through another change. Their lead singer for the life of the band, Jim Lindberg, left. After 19 years with the group, it was time for him to move on. A temporary replacement has been found in former Ignite front man Zoli Teglas. And so a new chapter in a band's story that could fill volumes.

For those volumes, I'd like to say "Thank You." Thanks for all of the inspiration. Thanks for speaking out and thanks for reminding me what really matters. Album after album. One day at a time. I'm looking forward to what's next. I know this isn't the end for Pennywise.

Written by BoredYak at 9:53 PM