They Seriously SAY That!?

After hanging out with Fred for a couple days, I spent a couple days hanging out with his dad, my uncle Willy. The old dude just had a gnarly accident involving the quickest route down from a rooftop. It was good to see him getting better and good to help him out with some stuff that most of us take for granted. You know, like moving. He couldn't quite drive yet, so helped him run some errands. In exchange he regaled me with his political views. It was a lot of fun hanging out with Willy again, it had been too long. That's why I was on this trip anyway, to catch up.

Next on the anti-agenda was the trip from southern Michigan to Austin, TX. Objective: no maps, no interstates. That lasted until Indianapolis (not that long). Getting around that metropolis without the big roads would be like eating spaghetti without slurping: no fun at all. I was warned about Indiana. They said it was nothing but flat cornfields. They were wrong. They forgot about the soybean fields. Lots of flat, lots of fields. But what's that I see in the distance? Is it a "Welcome to Kentucky" sign? Is my luck about to change? 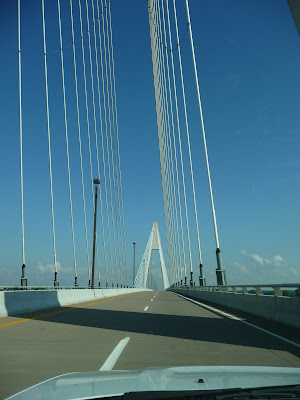 The Ohio River separates Indiana and Kentucky.
This bridge separates me from that river.

The landscape didn't change much south of the Ohio River. Maybe an extra wrinkle of hills. I'll tell you what did change, barbecue entered the picture. I remember the dinner well. Just after I crested a hill I saw what appeared to be a brush fire. Upon realizing it was smoke belching from a BBQ pit, my car swung right into the parking lot as if controlled by unseen forces. After parking, I realized that the car I almost swiped on my hasty entrance was a sheriff. BBQ saved me a speeding ticket, but nearly cost me my car. No matter. I was inside and ordering before the copper could check his rearview. When in west Kentucky, the meat of choice is mutton. Sheep, that is. Old sheep. Not lamb. One mutton dinner, please. With the sauce and smoke flavor, it's a little hard to get to the essence of mutton, but I'll try. First off, it was served shredded, much like pulled pork. The texture was chewier than pork, but the flavor was similar. Maybe somewhere between pork and beef. My first BBQ of the trip. A good meal. I paid for dinner and then it happened. The man at the register, "You come back, now." I chuckled a little, out loud. "I'll try." I had no idea they actually said that shit down there. I though that phrase and all of its conjugations existed solely on Beverly Hillbillies. Boy, was I wrong. That phrase stuck around 'til at least Louisiana, maybe Texas. 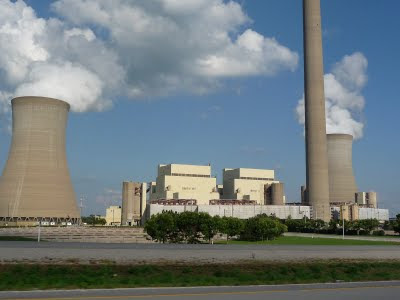 Kentucky = Nuclear!
(I had a picture of a cornfield, but I lost it. Just use your imagination)
That night would prove to be one of the more interesting nights on the road. I stopped in Murray, KY. Home of Murray State University. I know this because I could see it from the highway. The parking lot of the stadium was empty, save some heavy machinery that looked like it was 'garaged' there. Seemed like a good place to car camp. Then I decided to snoop around. The stadium was remarkably open. Lots of unlocked doors. I walked right into the stands and was about to drop my sleeping bag on the 50-yard-line. Then I turned my head and saw a young couple in a makeout session in the stands with me. The woman was more startled than I was. Inadvertent cockblockery completed, it was back to the car for some parking lot Z's.

Now, I should mention that I was sharing the hatch of my Subaru wagon with an ever-growing pile of junk. I acquired books from almost every stop along the way. Some gifts found their way back there. And my aunt Mia would not let me leave without this four-foot-tall Yucca tree. Seriously. They run a greenhouse and propagate the things off of cuttings. It was the smallest one they had. She wanted me to take the eight-footer that would have left no room for me to drive. Long story short, I was cuddled up next to a pointy tree for the rest of my car camping. I like to think it provided extra oxygen to enhance my slumber. The fact that I was reduced to a slightly extended fetal position probably negated that.
Written by BoredYak at 9:18 PM