Wow, I don't even know where to start. When last you heard from this intrepid traveler I was near Pine River, MN sleeping in my aunt's camper (which is nearly the size of my condo). Days passed at the county fair, the Happy Dancing Turtle and the homestead, where we got a chance to canoe, catch up and get acquainted with the world's 'friendliest' Jack Russel terrier. 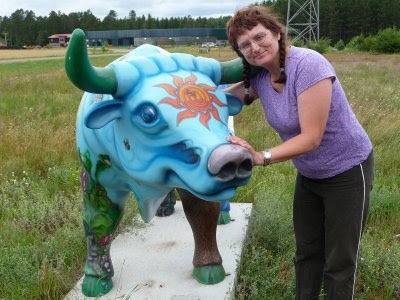 My aunt and godmother Bonnie next to one of Pine River's oxen. 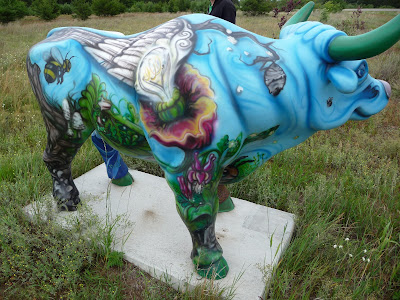 Another view of the eco-ox

My stay in Pine River didn't last nearly long enough, but Bonnie and Terry had to focus more attention on running their business and I had to head toward the rising sun. The day's drive wasn't that long so I decided on some aimless driving and ambling in and around Duluth, MN. 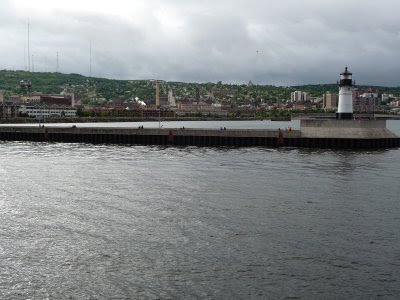 Cloudy, hilly, watery: sounds like a recipe for livability. 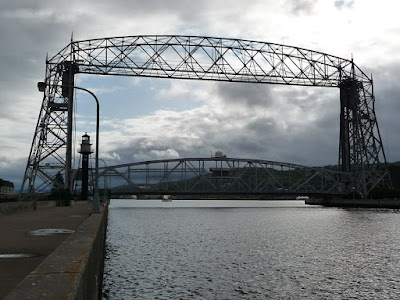 ...and they have a cool bridge.

Next stop, Barnes, Wisconsin; another small dot on the map where gravel meets blacktop. Another aunt with impeccable taste in dwelling location.

Day 1 was spent golfing at the world's smallest nine-hole golf course. Actually they only had three holes (on weedy, sand 'greens'), but they had three tee boxes per hole to make up for it. I haven't golfed since dinosaurs roamed the earth and never had an intention of playing the silly game again, but my brother had his clubs and my aunt had some beers, so it was a go. Four holes, two beers, several lost balls and more fun than not later, my brother decides it's time to place a friendly wager. I'd been hitting the ball about as well as he, so I agreed. Lesson #1: never bet on golf when you're borrowing clubs from the bettor. Of course he won. He also won the two double-or-nothings that I insisted on after that. Ouch. Good thing the stakes were small. What a gambler that guy is. Had we not played all that golf, we could have played two other types of golf that day: disc golf and redneck golf (AKA horseshoes). Not to be...

The next morning started off bright and early... for everyone but me. Uncle Mike had to put in a morning at his greenhouse and Aunt Mia, well she's just an early riser. Around 1 we all finally packed into the car and headed even farther north. Meandering, tree-lined roads guided us (back) to the great mass of water that is Lake Superior. 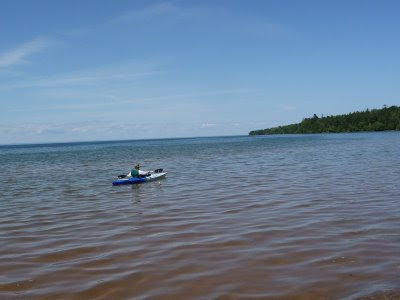 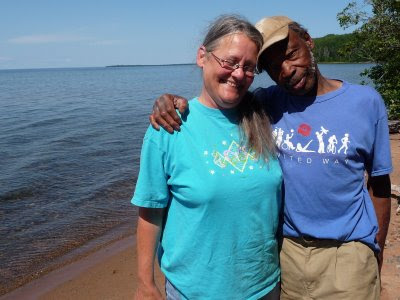 Mia and Mike, lookin' like they love each other

Mia says that the shores overlooking the Apostle Islands are her second favorite place on Earth. It's not hard to see why. Clear water, sandy beaches, lush greenery, apples or berries depending on the season (fresh raspberries for us) and a sense of calm that permeates all. An obligatory tourist trap town caters to your kitsch and petro needs. Another quick stop provided smoked fish, cheese and crackers to quell the snack attack. A lazy, five-hour round trip was the perfect way to catch up with my relatives and see some new sights.

Now I come to the realization that a whole section of my North Dakota (!) voyage got forgot in my excitement. Power plant roofs and exploding ships. . . Don't even dream about missing this one.

Oh and for all you vicarious travelers, I spent last night partying in Madison, Wisconsin. The scenery has changed around here but the prevailing attitudes have not. Namely, drinking beer. I revisited a staple beverage from my higher learning days called Spotted Cow from the New Glarus Brewery. To be honest, it wasn't what I remembered. A taste of Portland brew and my tongue is jaded. Tonight, I'm headed to Milwaukee, the good land. Maybe I'll sample their local brew, maybe I'll take a ferry across the magical Lake Michigan, maybe I'll stay find fame and fortune as The Onion's travel writer. Time will tell. If only I could decipher its language...
Written by BoredYak at 2:18 PM