I Wonder If They Need An Official Blog Sponsor

Need something to do this weekend in Portland? It's gonna be hot out, so maybe taking your ass to the coast and learning some water sports is in order. Failing that, we get a snowboard rail jam and a park skating contest on back-to-back days. Let me give you the dirty dirty.

First off, the Cricket Campus Rail Jam has been gnawing its way through college campuses in the west for months now. What started in Arizona will come to a spinning, sparking, pressing and sliding conclusion in Portland's Pioneer Courthouse Square (not really that close to any college campus, but whatev'), Saturday, May 30 at 1pm. They better have the snow cone machine on ludicrous speed to keep up with the projected mid-80s heat wave. Oh yeah, and Todd-would you rather-Richards is going to be there. He needs no intro and he is still high-larry-us. Probably the best MC/host type of all tyme-ah. All the proceedings are 100% free, so if nothing else, show up for the product toss. Maybe you'll score some panties from the energy drink sponsor.

Next day, not much different. Still predicted to be hot. Still sizzling, amateur, board-on-rail action. Still free. This time in a skate park. The Zumiez Couch Tour hits Glenhaven Skatepark and it doesn't let up until everyone has heat stroke. Actually it runs from noon 'til 6. Plenty of free junk from sponsors. The Enjoi team will be there to show you how it's done and/or write their names on things. Finally, when you're so sunburnt you can't even see past your swollen eyelids, the bands start, so you don't have to worry about it. Kandi Coded (featuring Jamie Lynn) starts things off and Emery shuts them down. Because it's a school night, the festivities will end while the sun is still high in the sky. Did I mention sunblock? We Portlanders aren't used to the cloudless skies. Exhibit A: my flaking arms from our last bout of cloudlesness. In addition to the requisite energy drink and skate sponsors, this one also has a burrito sponsor (for the last time, they're not owned by McDonalds anymore, there's nothing left to feel bad about) and a meat snack sponsor. No one goes hungry here. 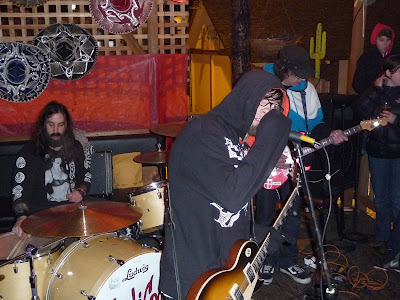 Kandi Coded, in case you forgot

Bottom line: free 'action sports' (am I the only one who doesn't like that phrase?) entertainment all weekend long. Throw in a couple after-parties for the grown folk and you got yourself a reason to show up late for work on Monday. You might drink enough that you regret it, but trust me on the sunblock. You'll never regret that.
Written by BoredYak at 1:12 AM