The folks at Lib Tech are nice enough to support the Greasebus, which means free Banana demos for all Greasebus riders! I finally got a powder day at Meadows and it was bluebird. Let me break it down for a second: I rode a bus powered by vegetable oil up to the mountain for $10, I got to demo a hot board for free and it was a bluebird day at a notoriously cloudy spot, with 8 inches of fresh pow. I thought I fell asleep on the bus and was dreaming... 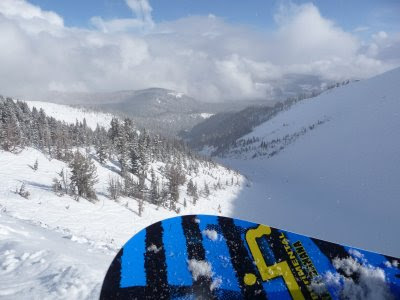 Then I found a trash bag full of gold and ice cream sandwiches on the runout...
No, really, it was real! (except for that trash bag) Let me tell you about this board. Now, you might say, "Graham, a million other people have reviewed this board already." You're probably close, give or take a few hundred thousand. But, I ask you, how many of them were riding at Mt. Hood Meadows during a freak occurence of both powder and sunshine? And how many of them were 6'1" and 170# with size 10.5 boots (DC Super Parks) and Technine MFM Pro bindings? And how many of them consumed exactly three mini Clif Bars (Oatmeal Raisin) and contemplated the writings of the Dalai Lama whilst riding? That's what I thought. Every review is a unique flower, so don't, um, de-flower me by writing off my review before it gets started. Hear me out.

My first impression with the board was that of it's average weight dangling from my foot on the lift. Upon strapping in, I immediately set off to test the flex and ollie pop power of this reverse camber shred stick. As expected, it was buttery like a French pastry with all the pop of a five-year-old in a bubble wrap factory. After a couple runs, I was reacquainted with the BTX. Going back and forth between BTX and a standard-sidecut, cambered board takes some getting used to. Most notably, the turn inputs are slightly different. Once that's accounted for, you have the longitudinally loose feel of the reverse camber. Couple that with the torsional softness of the Skate Banana and you have a board that is super-fun to play around with. I really put it to the test in a couple icy, chunky patches and it wasn't much fun there. No board would be. It was a little too soft to stand up to the chunks and a premeditated ice carve was more than it could handle. In reality, I'd never try that if I wasn't testing a board. I'd just avoid it. The test, then, is for those times when you just can't avoid it. To be fair, it's hard to lose an edge on a Magne-Traction board. They do help on ice, but they don't turn it to powder. Speaking of powder, did I mention I got to ride that, too?

After a short break, I headed to Meadows' powder haven, Heather Canyon. Freshies were still available even later in the day on a Saturday. The banana didn't make a drastic difference in pow, but I never submarined nor did my back leg go on strike due to overwork. The skate felt a little soft and unstable on some of the steeper sections where the powder gave way to more packed snow. I'd like something a little stiffer and damper for spots like that. In the trees it went edge to edge like it was in a slalom race and got me out alive when the fluff turned frozen-over.

Overall, the Skate Banana is a fun board and isn't that what it's all about? Oddly, I didn't ride it on anything manmade, but if pressing, popping and powder are your game, try it out. I can't speak to pipe or rails as I usually avoid those (my guess is that it would be better suited to the metal than the U-tube). Also, high-speed corduroy carving isn't this one's forte, so beware. Other than that, this is a board I'd be happy to own and despite the name it's well prepared for a range of terrain outside the park. 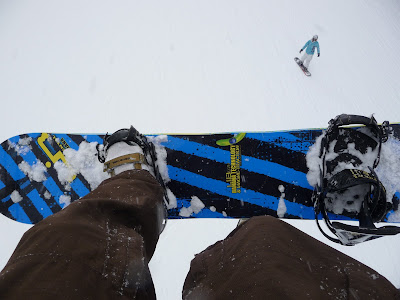 Check out Lib's site for all the tech specs
Written by BoredYak at 12:51 AM