Righty-o, so I wake up on the first day of riding after a couple hours of sleep and head to the stretching/yoga class. Just what I needed. Seriously, odds are good I was in for a snore alarm clock, so I might as well be just barely awake. I'm kinda bummed that this was the only session that I made it to because this was the last day I had any appetite in the morning, too. Speaking of breakfast, Baldface does it up right. The spread was matched only by grand $20/plate buffets. Hot multigrain cereal and homemade granola with brown sugar, homemade yogurt and fruit toppings. Hot bacon, sausage and eggs. Homemade breakfast sandwiches and a bevvy of bread products with an assortment of toppings. Grab a cup of hot tea, coffe or cocoa and take a seat. Gotta chow down before you throw down. Then, it's time to pack a lunch because the cat don't come back 'til 4 or 5. Pick up a reusable insulated bag and fill it up with any of a dozen different homemade sandwiches, granola bars or apples and oranges. And don't forget the homemade cookies and brownies!

Now it's time to get geared up, you know, just like any other day on the mountain. What you'll need depends on what it's like outside. Check the weather report. Today: 65cm (just over 2 feet) fresh snow, temperature -5°C. Rub eyes and check again. . . yeah, you saw it right. Cue giddy school-girl giggling. Pack extra underwear because you'll probably piss yourself out of balls-out bliss after one turn. OK, now go to the gear room, grab your freshly waxed board and the most important piece of equipment in your arsenal: the avalanche transciever. I have no idea how to use one of these, so I better snap out of my light-headed rush at the conditions and pay attention during avalanche class.

I don't mean to gloss over this because avy preparedness is the most important thing for a backcountry rider. But I'm not qualified to teach you myself either. Learning from a trained professional (in our case two) is the only way. This class was where we met our lead guide, Joel, and our sweeper guide, Greg. As well as being a fine guide and hell of a good guy, Greg was a snow expert. You have a question about snow, ask him. What's the average avalanche burial depth? Greg says 80cm to 1m and I believe him. Joel was great, too. He laid out the template of how to use a transciever to find and rescue a buried rider. The stuff you need to know, but hope to never have to use. I couln't have asked for two better guys to show me the ropes on my first foray into the deepnessness. 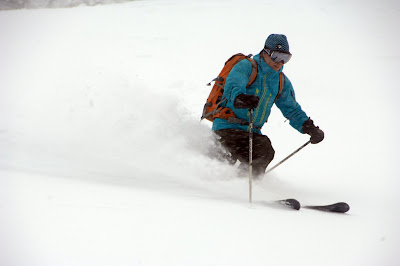 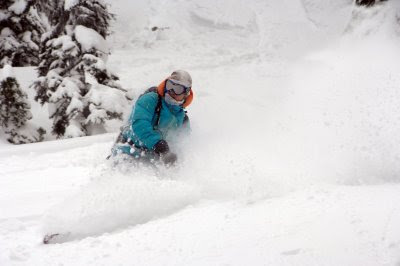 After finding our beacons, it was time to pile into the cats and get out there for some fun in the BC pow. Admittedly, the first few runs were nothing like I thought they'd be. Then again, I didn't much know what to expect. I was not that smooth and having a hard time. Here's where Greg came to the rescue. He gave me a lot of pointers, got me to slow down and got me to take bigger turns. Basically he got me to chill out and get over the jitters. He also suggested that I set up a 156 Fish for the next day, a bit of advice that would be the turning point of the trip. That first day, more than anything was about progression. Going in, I thought I knew powder. It was like spending life in a backyard kiddie pool and then getting thrown into the ocean. The adjustment took a while. Any time Joel took us to an area where there was a cliff, jump or other opportunity to huck, I took the easier way down. Like a blind man at an orgy, I was all about feeling things out (Thanks Naked Gun).

None of this is to say I wasn't having a good time. Quite the opposite. It was like snowboarding for the first time. What's more fun than that? It was straight up playing in the snow. Spending time on your ass teaches you the best way to get up. As with the saying, it's not about how many times you fall, it's about how much fun you have when you're up. Right!? We had 13 people in the cat that day, which left an odd man out. Guess who that was? Mostly I rode in a group of three with a couple other guys from Portland. One was Oliver and I don't remember the other guy's name. If anyone has contact info for those two guys, hook me up. They left after two days and didn't ride in my cat day two. The rest of the time I rode with Greg. Without that guy, my trip wouldn't have been nearly as much fun. He helped me out constantly and was great guide to have around. Plus he was just a nice guy off the snow, too. Whatever they're paying you, Greg, it isn't enough. Huzzah!

Lodge time came too soon. I was just getting the hang of it. My mind was focused on hot food, cold beer and a quick nap before dinner. I woke up just in time to catch the slide show of Dave's photos before digging into another replenishing dinner. The Jesus jokes flew fast and furious and I was even treated to (maybe treated isn't the right word) an impromptu serenade of the chorus of Jesus is Just Alright by the Doobie Brothers (who are playing a show in May at the Rose Garden with the Allman Brothers Band, count me in). That was something never before heard by these ears. A first of firsts. Then it was time to set up the new board, a Burton 156 Fish. After another drink and a recounting of the days events with equally stoked out friends, it was off to bed only to get up and do it all again tomorrow. What could possibly be better tomorrow? Well, for one, Dave Thomas (no, not that Dave Thomas, the photographer) joined us to bring out that Kodak courage. Also, I had the right board and my confidence on the rise. 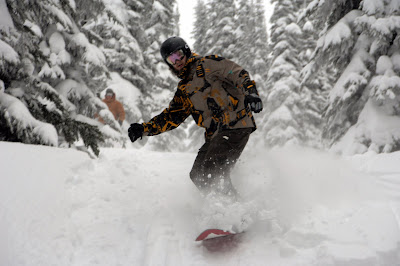 Tip of the iceberg Dave Thomas photo
Written by BoredYak at 11:00 PM