Where is the Love? A Manifesto of Sorts

I was checking out X-Games coverage today when I came across an article by Mary Buckheit called "No Shame in Shaun." Never before have I seen an article miss the point so thoroughly I felt the need to write a blog on it.

Let me start with a bit of a disclaimer. I have a journalism degree, not that anyone needs one to realize that sensationalism sells, but it emphasizes the point. I get it. You need to draw a hard line on a topic and ride it through the conclusion. Having an unpopular viewpoint or pissing people off can be a recipe for success. Especially when your topic is Shaun White, someone who people want to read about anyway. So the writer started with a good premise. Then it all fell apart in ridiculous assumptions and meaningless analogies.

Let's start with the topic. As the title implies, she's all about Shaun. Specifically, people not hating on him. I'm all for that. After all, we're all human. We all make choices and no two of us would make them all the same. Get over it. That's why I'm no 'hater.' Would I want Shaun's skills? Sure. Would I parlay them through an agent into the kind of life he lives? Not for one second. That's where our author misses the boat. Plenty of riders have or had the talent and never turned into media wet dreams. Craig Kelly and Terje Haakonsen come to mind. Craig was winning every competition in his day only to give up the competition scene for backcountry freeriding. Unfortunately, an avalanche ended his life too soon or I'm sure we'd still be reading about his epic lines. Terje boycotted snowboarding's addition to the Olympics in his prime. Then, instead of just complaining about how skiers were making all the rules, he started The Arctic Challenge (with fellow old-school ripper Daniel Franck). Out of that grew the TTR, today's main ranking system for competitive snowboarding. Oh yeah, and he set the world record for snowboard air at age 33 on one of his Arctic Challenge transitions, so he's still killing it. Bottom line, your image is the sum of the choices you make and that's where some snowboarders diverge from White. I'm not alone when I say I'd rather hear more about how he helped out kids in Rwanda and less about how he just inked another endorsement deal.

Another idea that's got to go is the one that Shaun, as Buckheit puts it "single-handedly brought sponsors and dollars and droves of fans to the sport." The game was already in town when the White bus arrived. He wasn't in the first two Olympics. He wasn't even the first millionaire snowboard pro. I'm not saying he jumped on the bandwagon, but he wasn't exactly Christopher Columbus either. Near as I can tell he went to camp on Mt. Hood all summer every summer from birth. He (and his parents) probably knew he could shred for a living, but had no idea it would blow up this big. Maybe I'm way off... Hell, the US Open was in its second year at Stratton when he was born. Now, sponsors like hair care products, big box stores and car audio makers (I won't name names because they haven't paid me off yet), those might be new to the Shaun White time frame. I guess you're right there. Those, I think snowboarding could do without. They didn't help us get on the "ski" lifts back in the day and they sure as hell aren't helping drop lift ticket prices now. Without launching into an anti-advertising rant, we have plenty of shred companies that are willing to pony up for quality events, maybe we don't need 20 of the same halfpipe contests every year just to be sold energy drinks from a different angle. 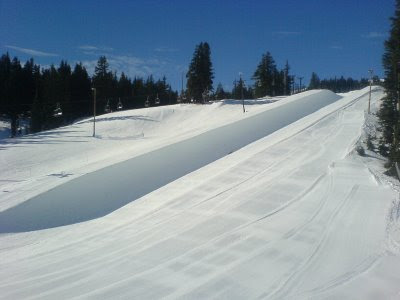 Your ad here?
Now, let me share a funny story about Shaun White fans. I went to the X Games last year. I have a friend near Aspen and I found out it was free to watch so a few of us went to check out the finals of slopestyle . One of the guys and his pregnant wife were not enjoying themselves standing in the cold, so why were they staying? To get a picture of Shaun White. Well, that year was the year he broke his board before his first run of the finals, so when his number got called, he was scrambling and Mikkel Bang ended up riding while Shaun figured out what to do. Meanwhile, this guy and his wife are making for the exit, stoked because they thought they just saw Shaun White, when they actually saw Mikkel Bang. I had to bring them back to down to Bummerville where they begrudgingly waited another five minutes to watch the Tomato let fly on a broken board. What's the point of this rant? Plenty of fans out there watching aren't snowboarding fans, they're Shaun White fans. Snowboarders aren't used to that. We're used to people getting into snowboarding more for the feeling and less for the spectacle. But now the media age and the Shaun White era are upon us. People now see snowboarding as a means to be in commercials and be on every magazine cover. Not all of us like that. Not all of us would have made those choices.

On the same front, here's another line of reasoning that doesn't work:

"He's the little indie band you used to go see in a college bar that just got nominated for a pop Grammy." (another Mary Buckheit quote)

He's never been indie. He's a product of the media! No one knew about him before TV because he wasn't competing before snowboarding was televised. He grew up on TV. It's stuff like this that had me screaming, "Do you even snowboard!?" at the screen while I was reading this article. Now, if you're using Shaun as a metaphor for snowboarding and you think we don't want to share snowboarding with the masses, well, maybe. Personally, I'd love for everyone to ride or at least feel the way I do when I ride. I even mentor kids through snowboarding. Some people do still wish for days gone by, though. Maybe those are the 'haters' you're talking about...

When I say you're missing the point, my point is that Shaun White has made himself into just another celebrity. Just like other figures in the public eye, his choices will be scrutinized. He put himself in that position and I hope he has tough skin about it because no one is going to agree with every decision he makes. Especially the deals that seem to be all about the money. He is the first snowboarder on everyone's lips and we don't all want him speaking for us. My point is, he is not, as Buckheit put it, "an over-achiever in a scene ruled by snowboarding's unspoken statutes of slack." He is a competitor first in a scene whose genesis lies at the antithesis of competition. The only way I see the progression of snowboard competition as beneficial is if it brings the masses to discover the feeling of snowboarding. Otherwise it might as well be another ball sport or fight. And I hate to see it reduced to that.

What we have here is a difference of opinions on the word 'progress.' You see, some people see progress as adding another 180 or flip to a trick. Some people see it as adding another '0' to a paycheck. Some people see it as naming snowboarding right alongside other mainstream sports like golf. Some people see it as another new feeling from sliding down snow on a stick. That's what adds to the richness and diversity of snowboarding. To some it's a sport, destined to be judged and debated. To others it's an art: never quantified, always appreciated. Any way you look at it, there are myriad ways to hate on any snowboarder. It's just another opinion to express. What did he (or she) do? What did he do differently? What did he do first? At the end of the day do any of these guys really need or care about your sympathy? Maybe empathy is what we should strive for. If their intentions are good and they aren't just taking snowboarding to the bank, then what's the deal? Shaun is just another guy and snowboarding is just another way to feel good while passing the time. At the same time snowboarding wouldn't be the same without him, snowboarding and snowboarders don't owe him anything but the mutual respect of a human.
Written by BoredYak at 3:48 PM