Hey you, need a job? We'll start you at $80,000 a year. No high school diploma required. All you need is clean piss and a clean driving record. What's the catch? I'm no con man, it's just manual labor. Are you willing to relocate? Nice little town of 15,000. Mom and pop establishments on Main Street. Continental weather. That is to say it's Antarctica in the winter and the Sahara in the summer. I'm just jerkin' yer chain. It gets chilly *cough* below zero *cough* in the winter but it's over 80 most of the summer. If it rained any less it would be a desert. This is important because you'll be working outside. We got a nice river to cool off in. Nice country, too. Miles and miles of miles and miles. Life in the vast lane. You know, buffalo roaming, deer and antelope playing. You'll get used to the mosquitoes, I'm sure... 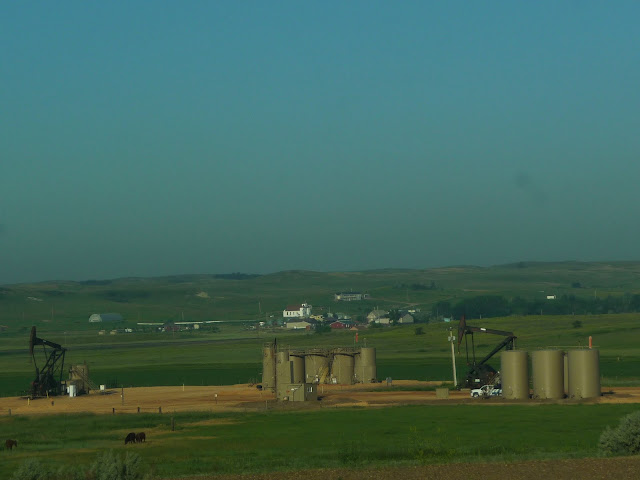 Don't worry about finding a place to live. You won't be able to anyway, so we'll put you up in one of our 'man camps' out at the job site. It's like a dormitory. You liked summer camp, right? Why won't you be able to find a place to live? Well with all these jobs, people are moving in faster than we can build. Don't bother with hotels or campsites, either. All full. Mobile home parks that were fields of foundations five years ago, now full. Where do the kids skate now that all those foundations have homes on them? They skate in the skatepark. Yeah, it's new. That's neither here nor there. Get your name on some waiting lists for apartments if it makes you feel better. We just put up a new camp that we got from Vancouver, BC. They used it in the Olympics. Yeah, I dunno, maybe Michael Phelps stayed there.

What kind of work is it? Oil, my boy. Lubrication of the nation. Makes the world go 'round. We're sitting on the Bakken Formation. Saudi Arabia of North America. Can't have internal combustion without it and can't have 'it' without you. Whatddaya say? Vegetable oil!? That's nonsense. Them plug-in cars, too. Malarkey. Try towing a boat behind one of those. Never happened. And you'll be buying plenty of toys with the money you're making. Not a boater? How about a nice camper, then? Get you out on a hunting trip. Maybe some snowmobiles.

Now the town's going through some growing pains, but you should have seen it last year. We've got apartment buildings and hotels going up all the time. Only way we could have more groundbreakings would be an earthquake! No, not around here, just a little oil patch humor. The traffic, well, that hasn't gotten much better. You add 50% more residents and all that oil machinery in five years and something's gotta give. Just give the truckers a break when they're runnin' red lights. Who knows? That could be you soon. What else gives? Well the service around town sucks. Restaurants can't hire enough help because we're paying you guys so much. I hear they have to pay damn near $20 an hour at McDonald's just to keep up. A-har-har-haaaar. No one can compete with the black gold! Plenty of good bars, though, don't worry about that. Even a couple you can go to if you're not looking to fight. Just got us a new titty bar, too. A little competition is just what that industry needed. Lord knows we're not exactly pulling in women any other way. Oil is a man's work, ma'boy, and Williston's a man's town. You'll fit in fine.

You see, son, it's guys like us who are the unsung heroes of this great nation. We work morning, noon and night to make sure that this otherwise barren landscape produces that precious oil. What would we do without it? Great cities like New York, Phoenix and LA wouldn't be possible without it. We wouldn't be able to win the wars, hell even fight the wars without it. We use it to harvest the food on our tables. We use it to build the roofs over our heads. I ask you, where would we be without Mother Oil!?