At the beginning of the year I bought some new bindings and now with about 30 days on them it's time to talk a little bit about the Union Force SL.

Your first contact with this binding should be this little oscar. It's a video FAQ. Why don't other companies do this kind of thing!? So helpful. And who doesn't like to sit and watch Johan talk for a bit, regardless of bindings? We all get lonely sometimes. On to the bindings...

Yes, they are lightweight. My kitchen scale says that the left one weighs 2 lbs, 1.375 oz with all the hardware. When I get my backups back from my friend, I'll have something to compare that to. If you have the specs on your bindings, let me know. Right now, I can just speculate.

Stability plus tweakability (yes, it's a word). The Force SL delivers all-mountain response and still lets you tweak out a tuck-knee like Nicholas Müller. DO NOT rotate the highbacks unless you plan on grinding off the excess! If you don't, this will happen to your boots: 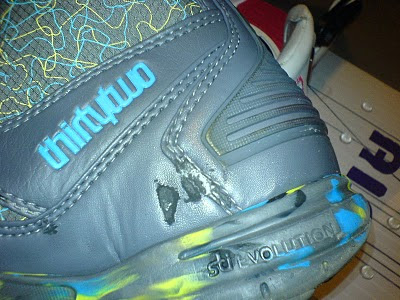 These boots were new at the beginning of the season (review forthcoming). I rotated the highbacks, noticed the damage and rotated them back immediately. Be warned.

The straps are the most comfortable I've ever ridden. Union got it down this time around. The toe strap works well in cap strap and over-the-top positions and all angles in between. Other than a little wear (both ankle strap seams are splitting by less than an inch and some wear on the end opposite the ratchet; the toe strap is a little scuffed, see pics) they are holding up: 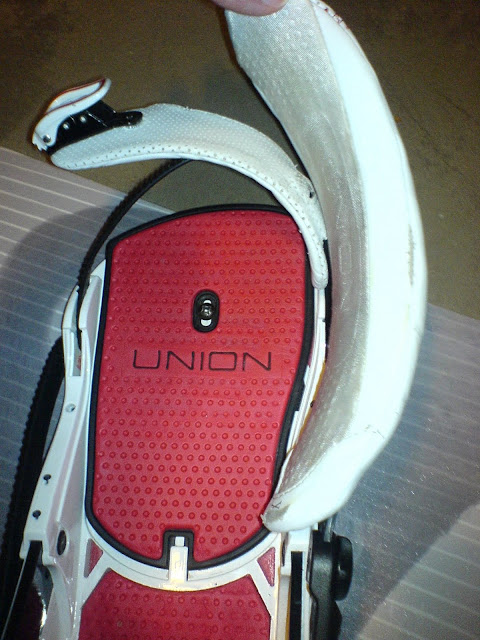 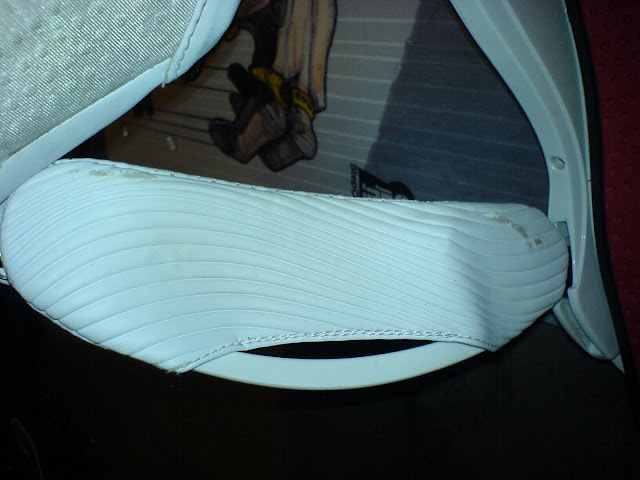 It would be nice if manufacturers wanted to go the leather route if they could include a single-use packet of Sno-Seal or other such protectant. As it is, I should have known to apply my own, but didn't until it was too late.

Adjustability is another area where these binders shine. The forward lean adjustment couldn't be easier. Just turn one piece to the side to loosen the slider, slide that puppy up and down to set your preferred lean (make note of the number for reference), turn back to tighten and ride away. Done in seconds, just like in the above-linked video. The straps are easy to adjust, too. The ankle strap is even tool-free for changes mid-run. My boot is a 10.5 and I went with the L/XL as per manufacturer's recommendation. As it turns out, I think I could have easily gotten by with the M/L, but my boots are on the low-volume end of the spectrum (and I got mine via pro-form and all they had was L/XL). If you plan on squeezing into the lower size be sure to take your boot to a store and try before you buy. Anyway, chalk it up to the flexibility of this binding that the straps aren't even at their shortest and neither is the heel loop. If pressed, you might fit a 9 in there and be held in tight as though to your mother's bossom.

One thing I'm not so keen on is the screw-down footbed (see 2 pictures up). If that screw strips, you're screwed (pun-tacular!). Also, I'd like to see Union add a canted footbed in the future. It seems like a natural for their footbeds and it seems like my bum knees would benefit. One other thing to beware of, the red highbacks bleed onto your boots. 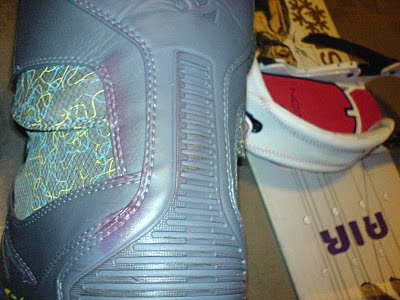 I'm no fashionista (it's covered by my pants anyway), but it's something you might consider. If you wear your pants inside your bindings, they may turn pink, too.

Past that, all the little things are in place. The ratchets are smooth and easy to crank down. The toe ratchets took some getting used to for me to release them, but now I don't notice so much. They fold down flat (unlike my old Technines) for ease of use on the roof rack. The look is clean and stylish with some logo hits, somewhere between Union's Force and Data bindings.

Finally, these bindings are just plain comfortable to ride. Like I said, the straps are as plush as a they come. The EVA cushioning, along with the footbed and highback padding make for a cushy ride. The inward flexibility of the highbacks not only helps tweak out Japans, but it also decreases pressure from riding with a wider stance.

After the first 30 days in these bindings, I'm pretty impressed. If memory serves (and mine usually serves me poorly), the average shred, industry-wide, gets eight days on the mountain per year. This means I've already spent nearly four average seasons in the Force SLs. If all goes like it's been going, I don't see any reason I don't get another season to season and a half out of them. Something like 120 days. That's four-hour minimum days, too, remember that. Also, now is about the time you want to be shopping for a product like this. They retail at $279. Now that gear is going on sale, you could probably pick them up for 20-40% off if you shop around and act fast.

In the end, this is a high-quality binding. Comfortable and responsive, yet flexible. All-mountain shredding. Hairy trees to big, airy steez. May the Force (SL) be with you!
Written by BoredYak at 12:53 AM