Silver Star Mountain Resort: Maybe if I was a Rich Skiier

Back at the beginning of the season, my friend Suzanne and I went to the Warren Miller movie. The movie would have been entirely a letdown if not for the fact that we had a "Price is Right" moment at intermission. When it came to the big prize of the evening, a three day trip to Silver Star Mountain Resort in BC, it was her name that got called to come on down. There was much high five-ing and jumping around.

Then the waiting began. . . By the time we heard back from the crew at Warren Miller and/or Silver Star, it was March. It was April before we could synchronize schedules and roll out. But seriously, can you turn down three nights of lodging and three days of riding even if you do have to drive (in my case, just ride) eight hours to get there? Well we couldn't. The crew we ended up with was Suzanne, her brother Thomas and me.

The drive was quite rainy - April in the Northwest - but amazingly scenic when the clouds did break. We went through almost every possibly type of weather along the way, including some dense fog that had Suzanne freaking out when we finally got to the mountain road. We made it just fine and had time to check out the little village before racking out for the night. It was a pretty standard mountain village with a couple bars, a couple shops, a store, a bunch hotels and houses taking up as much space as the rest combined. The only difference was, everything is painted super bright! It was like mountain village Disney. 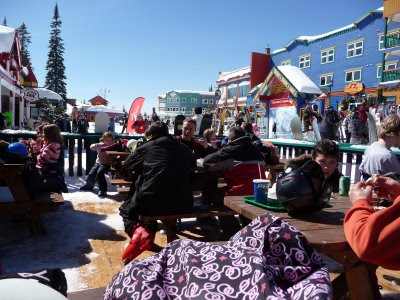 I was just waiting for them to sing, "It's a Small World."

The bonus, of course, was that when we woke up, the chairlift was a five-minute walk/ride away. That's something you don't get on Mt. Hood without a stay at Timberline Lodge. 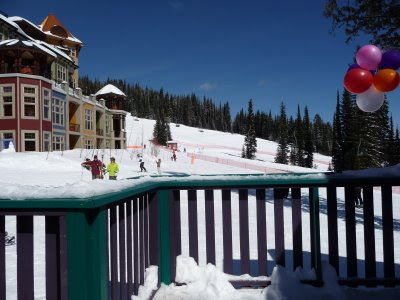 Our digs were right behind the one on the left.
The riding itself was OK, too. We got to experience every possible type of weather on the mountain, just like on the road. Day 1 was the national championships for 13 and 14 year old ski racers, so one side of the mountain was packed with spandex-clad kids with two sets of skis each. Of course, that was the side with the steeps and good pow. Unfortunately, that side also required the world's longest traverse to get into and out of. Seriously, it was two miles each way. My calves went on strike until I showed them the light powder among legit glades.

The sun came out on day 2 and afforded us some grand views from the top. The Okanagan Valley spread out before us and I was again thanking the hotel for the complimentary lip balm/sunblock. 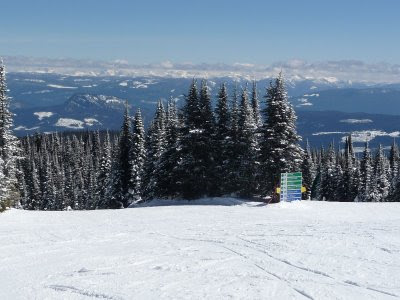 Clouds just rolling in to mess up my shot.
Today was mostly about the park. They've only got one, but they way they set it up, that's all they need. It was really well set up with features of every size. Maybe that's what corporate sponsorship affords a snowboard park. The bigger jumps looked a little sketchy, with their Wu-Tanged out lips and short space between, but the medium features were right on. The park staff at Mt. Hood Meadows could take a hint or two from these guys. The pumping music was a good touch, too. We finished up the day on the other side of the mountain with some nice glades, natural hits and all-around Northwest-style riding. Annoyingly, there was a bit of unfinished construction to contend with. The stuff on the actual run was roped off and actually made for a fun side-trip, but one of the trails seemed to go out of its way for what I can only assume is development that has yet to happen. I mistakenly hit that trail once, ended up hiking a half an hour out, and rode in fear of it the rest of the trip.

By far the most annoying part of the trip, however, was the lift attendents. I've never seen lifties do less. On the bright side, the lifts almost never slowed down. On the down side, one chair ride up, Thomas's "foot slipped off his board" (a likely story) sending his board sideways and on top of mine. He managed to get off the lift, but it was already turning the corner by the time I tried to bail. Let's just say I unsuccessfully exited into some powder off to the side (how my knee wasn't destroyed, I'll never know) and tripped the stop bar. All this time the lifty was chatting up a friend and drumming with a pop bottle on the lift speed controls. They actually laughed at us before even asking if we were OK! Unbelievable. I know they don't get paid much, but isn't that exactly the situation they are paid for? The only time they ever looked somewhat alive was at the end of the day, when one can assume an authority figure was about to check up on them. So lame.

On the whole, Silver Star has great terrain, but it's bizare layout leaves you scratching your head when you should be shredding. The allure of dry fluff and a nice park always holds sway, but this decimation resort with its dead lazy lifties won't see me back any time soon. Unless, of course, it's free...
Written by BoredYak at 11:51 PM