The big, early-season demo day at Mt. Hood Meadows got pushed back a week because, well, the resort wasn't even open when the demo was originally scheduled. What a difference that week made. Some crazy storm systems merged, stars aligned and Üllr's whiteout dropped 100" on the joint. Perfect day to demo some pow sleds, right? Try again. A quick pissing of rain turned 'waist-deep' into 'bulletproof' quicker than you can sing the chorus to "Umbrella." No matter, I made the trek with a couple friends and was determined to try out a new Lib Tech Banana Traction board that I'd heard so much about.

At the time of the demo I was around 6'1" and 170# with size 10.5 dogs. I wore new DC Ghost boots (also 'demo-ing' from Ben) and mounted the board with my Technine MFM bindings. This is a pretty soft/flexible boot and binding combo, for reference.

The first thing I noticed about the board was that... shit, they set it up goofy and I ride regular, so I took the first run backwards. My first time on a banana-ed out magne-tracion board and I'm backwards. How awkward. OK, got that fixed. Now for a real run...

I need to preface this one more time. The board I'm coming from is an Option Kevin Sansalone pro model circa 2001. That board is brick stiff. (Yeah, I'm demoing boards because I really need a new one, not just for shits) Keep that in mind when I say that the Dark was softer than I expected. Maybe it's the banana, maybe it's my supreme strength but probably it's just contrast to my most recent board. I didn't jib anything, but I bet the board would handle that arena just fine. Oh, and believe the hype. Banana = telepathic butter-ablility: you think about buttering and it's done. Simple.

Stability is also a strong point for the Dark. Both in straight lines and turns. I found the magne-traction to be subtle. It took a run to get used to, but it wasn't as radically different as I thought I might be. It did keep me in turns even through icy chop and I rode plenty of that throughout the day. When pointing it straight, the board soaked up the lumps and charged ahead like a fighter through the gauntlet. Definitely a reassuring ride.

For whatever reason, I wasn't expecting much pop from this board and I was pleasantly surprised in that regard. The thing really did "pop like a volcano," just like Lib says. The park wasn't up yet, but trail-side hits launched me farther than I was ready for before I got the board under control and knew what was up.

Unfortunately, I didn't get a chance to ride any powder or trees with the board. That's what I enjoy the most and if/when I get a new board those performances will guide my choice. I'll have to wait 'til next time as, again, I've heard these are places where BTX excels.

Overall, the 08-09 Dark BTX handled everything I could throw at it. Too bad the weather didn't leave me with much chuck. I have a friend who swears by his older Dark model for everyday riding and I wouldn't hesitate to recommend the Dark to anyone. I'd be remiss to leave out intangibles like all of the environmentally friendly techniques and materials Lib uses in construction and their Washington state production. Things like that draw me to a brand more than any marketing hype or sponsorship could. Drawbacks? If you can afford a price tag over 600 bucks, come to the Dark side. 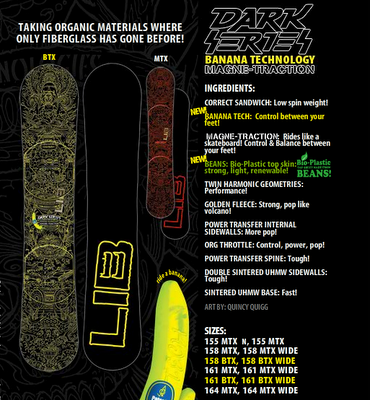 Go see Lib Tech for all the dirty specs.
Written by BoredYak at 4:44 PM