Pow Wow and the Art of Winter Driving

Yesterday was a deep pow day at Meadows. A huge storm is rolling through dumping snow throughout the region, even as far down the valley as the city of Portland. This system is responsible for about 90% of the snow on Mt. Hood right now. With the prediction of a particularly generous 20-inch overnight load and the announcement that the main lift, Mt. Hood Express, was fired up, I rallied to get a crew together. In the end, Thomas and Colin joined me for the treacherous drive up US26.

I'd like to take a second to say, I'm not going to write about every time I go up to the mountain. I realize that it's much more exciting for me to do than it is for you to read about. That said, you can be sure that all of my posts have some content worth reading. Keeping you stoked and informed is what I'm all about. If I feel a product review would do that better than a post that says, 'Look at me, I took some park laps with my friends,' I'll post the review. Actually, I'll probably post whatever I want until I hear some comments from you. Turning this into some sort of dialogue would be much more fun and interactive than the current lecture.

The meaty part of this post regards driving in winter weather conditions. The snowsports community exists in a paradox in that the better the conditions are on the mountain, the worse the roads are going to be on the way. 'Chains or traction tires required,' is a sign we're all familiar with and it means you're in for a long drive. I personally drive a Subaru Impreza with all-wheel-drive and all-season, M+S rated tires. I've never put chains or studded tires on it and with few exceptions, I've always felt in control. 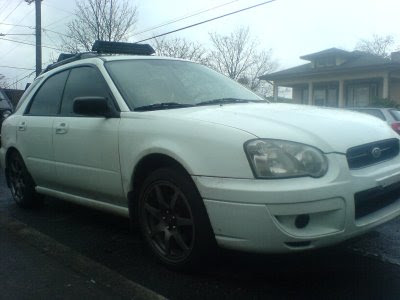 My snow-mobile
My equalizer is driving cautiously. I'm not ashamed to drive 20 or 30 mph in particularly dangerous conditions. Not to sound like a third grade math problem, but think about it this way: if you have a sketchy, 30-mile drive to the mountain and you drive 45 mph, you get there in 40 minutes. If you make the same drive at 30 mph, it takes an hour. Is it really worth 20 more minutes on the hill to be passing people in a blizzard? On the way up yesterday we witnessed the unthinkable: a semi and a car stopped side-by-side putting chains on in traffic! This was even in an area with extra-wide shoulders specifically for chaining up. The rest of traffic was forced around into the chain-up zones to drive past. I shouldn't have to waste any words telling you all how dangerous this is. Chain-up (and chain removal) zones are there for a reason. They give you a safe place to operate, so that you don't have to worry about cars whizzing by on both sides. If you need to put chains on your vehicle, please use the designated zones if possible or pull off as far onto the shoulder as you can. Getting hit by a car while chaining up for a powder day would be a shitty, avoidable way to go.

Enough about the downers, though, let's talk about the deep pow that awaited when we finally got to the resort. Boot-deep on groomers. Easily waist-deep on ungroomed runs. Reports of chest-deep powder mines between the trees were enough to keep me out. Especially with the sticks and weeds waiting underneath to snag you (remember, this is the first storm of the season and still only a 40-inch base). We stuck to a steady diet of 4 Bowl near the MHE lift and it provided run after run of steep and deep fun. When the Shooting Star lift opened, the crowd spread out and our laps went quicker. A couple more powder burials and we called it a day. Speaking of which, deep early season pow can bring some unforeseen challenges that you might not face when the base is more established. The same run that was an open rolling bowl in March might cliff you out earlier in the year. 'Expect unmarked obstacles,' is what Meadows always says and it's for real. Ride with a friend and try to stay within shouting distance. Knowing that Colin was nearby put my mind at ease a few times up there.

The final icing on the cake was seeing fellow Portland shred Scotty Wittlake on the hill. I saw a post of his on the Lib Tech blog from opening day, but seeing him in person was rad. I didn't say anything to him, but he's always been a guy who's style and attitude I've appreciated. This one's for you, Scotty!

Written by BoredYak at 2:49 PM