Finally! I've only been waiting since the first weekend in MAY! For those of you just joining us, Mt. Hood Meadows, the humble author's home resort, got enough snow over the weekend to open up three lifts today. I put the call out, but I guess my friends had the fear. Oddly enough, my friend Ben, who didn't carpool with me because he thought he had to give other people rides, pulled in right next to me in the lot. Turns out his other friends are weak, too. So we spent from 10am - 2pm cruising unexpected pow and popping cat tracks to fluff. It was super fun! For an opening day, the sticks were hard to find. I did endo on a stump once, but that's what the rock board is for. I was also ridiculously overdressed, as the forecast predicted -10°F with windchill, but the reality was 10° and dead calm. All vents opened, I was about right I'd have brought my camera if I thought my fingers would operate, but I got a few shots on the phone camera, so here you go: 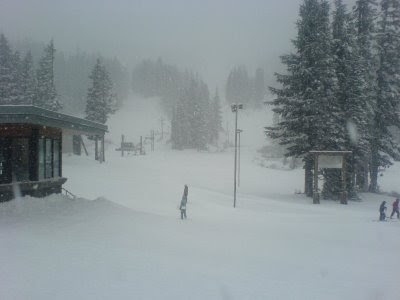 Here's the main side of the mountain looking empty. 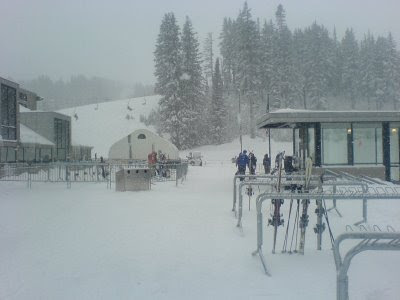 Another shot out front of the lodge: where is everybody? 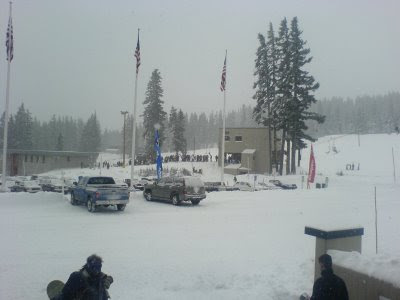 They're all in line for Daisy, the longest lift running.

My legs let me know that it had been a while, so half-day was the word. I was expecting that, of course. Some energy drink got me back to Portland, where snow in town had the place at a standstill. I'll never be used to that. Two cars in the ditch on the way back near town with about an inch of snow on the roads. Doing my driver's training in North Dakota has served me well in snowsports pursuits. A little ice cream followed by a hot shower, quick nap and huge dinner with my neighbors (thanks Kathy and Philip!) and I think I earned tonight's sleep.
Written by BoredYak at 10:59 PM